iPadOS 16 is now available to developer beta testers with improvements in Messages and Safari and the all-new Stage Manager, enabling multiple app windows and Mac-like multitasking on M1 iPads. 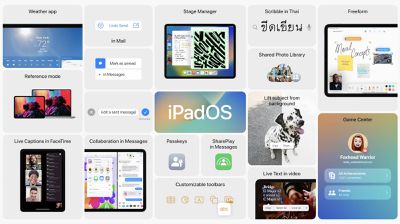 As has always been the case, many features are shared across iOS and iPadOS, and that's certainly true this year. ‌iPadOS 16‌ gains several major new features from iOS 16, including the ability to edit and unsend Messages, improvements to Focus, and more.

There are, however, some features and changes exclusive to ‌iPadOS 16‌ that take even more advantage of the iPad and its performance. We've highlighted a few ‌iPadOS 16‌ tidbits below:

The Files app on ‌iPadOS 16‌ is gaining some much-requested features from ‌iPad‌ users, including easier navigation buttons, easier access to common controls such as duplicate and rename, the ability to change file extensions, and more. The new changes are part of Apple's efforts to make iPadOS apps more "desktop-class."

System-Wide Undo and Redo and Find and Replace

iPadOS is gaining system-wide undo and redo functionality, making it easer and more Mac-like for users to easily revert changes made in apps and across the system. ‌iPadOS 16‌ also introduces system-wide find and replace that in the Notes app, works in-line.

With the high-end 12.9-inch iPad Pro running ‌iPadOS 16‌, users can take advantage of the Liquid Retina XDR Display and use the ‌iPad‌ as a reference monitor. This is aimed at artists and creators who need accurate colors and vivid detail when working on large projects.

Option to Turn on Lock to End Call

Under Settings, Accessibility, and Touch, users can now choose to toggle on "Lock to End Call," making it easer to end a current call by pressing the top button.

nvmls
15 years of OS development to mimic how a computer handles files, still limited though, and people clap ?

There’s really zero reason to get an iPad Pro over a MacBook Air.

Ironically the iPad mini might be the most useful of the iPad family due to its convenience as a consumption device.

You forgot to put that in your first sentence. Because for me, there’s really zero reason to get a MacBook Air over an iPad Pro. There’s nothing a Mac can do that my iPad can’t for my own personal use.
Score: 9 Votes (Like | Disagree)

There’s really zero reason to get an iPad Pro over a MacBook Air.

Ironically the iPad mini might be the most useful of the iPad family due to its convenience as a consumption device.

I let go of my MacBook recently because I wanted an iPad Pro. Why? My reasons were because I wanted a device that’s even more lightweight but also powerful. I chose the 11” because it’s the perfect size for reading books and reading study material on the train or plane. I can throw it in my back pack and I do t even know it’s there. I found the 12.9” just too big to do that and after a while became too heavy for reading in your hands for long periods of time.

It’s also perfect for math notation, taking notes, studying and doing research. I also started to get back into art which I haven’t done for years because of the iPad Pro. The value I get out of the iPad Pro has far outweighed the value I get from the MacBook. I don’t think I will ever get a MacBook again but instead will have an iMac or Mac Studio, an iPad Pro 11”, iPhone Pro, and an Apple Watch.

Each device has its perfect use case for me since I have an iMac at home and now an iPad Pro and iPhone. The MacBook has no use any longer for me and my use case. Others will have a different use cases and might need one for different purposes.
Score: 7 Votes (Like | Disagree)

Except true external display support and "State Manager", I don't really see desktop-class improvement here.
- Can I use Disk Utility.app to format/partition an external drive? No.
- Is Files on par with macOS' Finder? No.
- Is there a Terminal.app? No.
- Transferring my own music to iTunes w/o relying on another Mac? No.
- So-called "Pro" apps? No.
- ...

As long as Apple didn't go into that "What's a computer?" BS, it was fine considering an iPad as a bigger iPhone and not having bigger expectations.

This is a list of things most people do not do with their computers.
Score: 6 Votes (Like | Disagree)

bookcase
Have they come up with a way to delete text messages across all your Apple devices yet? I have to delete them manually from my iPhone, MacBook, MacBook Pro, and iPad.
Score: 6 Votes (Like | Disagree)

TravelsInBlue
There’s really zero reason to get an iPad Pro over a MacBook Air.

Ironically the iPad mini might be the most useful of the iPad family due to its convenience as a consumption device.
Score: 5 Votes (Like | Disagree)
Read All Comments