Just one day ahead of WWDC 2022, the all-new Apple Developer Center has opened, with developers able to receive a brief tour of the first floor. 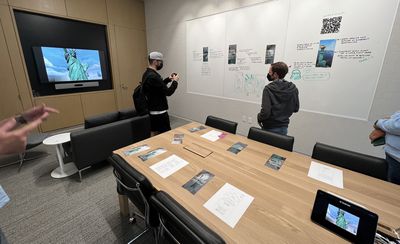 A room in the Apple Developer Center via Paul Hudson
Located next to the Apple Park campus, Apple describes the Developer Center as a "world-class facility designed for our community to meet, collaborate with, and learn from our engineers, designers, and experts." The center includes dedicated developer lab areas, pods, briefing centers, a state-of-the-art studio/theater, and more.

Paul Hudson of Hacking with Swift visited the Apple Developer Center and shared some photos on Twitter. Notably, he revealed that all of the meeting room names in the Developer Center are named after macOS releases, such as Panther, Leopard, Tiger, and El Capitan. The studio space with a stage and seating is likewise named Big Sur.

These rooms are packed with technology – it’s like an Apple Store just for developers 🤩 #WWDC22 pic.twitter.com/NijhFVojq6 — Paul Hudson (@twostraws) June 5, 2022

According to Apple's schedule, the Developer Center will remain open until 6 p.m. Pacific Time today, and it will be open again starting at 7 a.m. Pacific Time tomorrow. Only those who were invited to WWDC 2022 can attend the open houses.

WWDC 2022 will be held online from June 6 through June 10, with sessions and other content to be made available on Apple's website and in the Apple Developer app free of charge. During the opening keynote, Apple is expected to announce its latest software platforms, including iOS 16, iPadOS 16, macOS 13, watchOS 9, and tvOS 16, and there is always a chance of a hardware announcement or two at the event.

sorgo
The Los Angeles Room: remove all valuable jewelry and wear a bulletproof vest before entering.
Score: 10 Votes (Like | Disagree)

So, were there any rooms with names that we haven't seen before? Like the name of the next macOS release?

They wouldn't let anyone into the Bakersfield room.
Score: 8 Votes (Like | Disagree)

TheYayAreaLiving ?
Woah! This is like a hidden treasure for the Apple developers. Happy to see Apple really went above and beyond for all the developers around the world.
Score: 6 Votes (Like | Disagree)

Tell me what developers can actually do there, please.

Mr. Awesome
The room names are great! I would love it if they were themed - a Leopard’s fur couch in the Leopard room, a Lion head in the Lion room, OS X posters in all the rooms. It’d be a nice touch.
Score: 6 Votes (Like | Disagree)

Are you attending this year?