In iOS 15, Apple's Maps app includes the ability to use augmented reality walking directions in some big cities, and today we learn that Tokyo has become the latest place that you can use it. 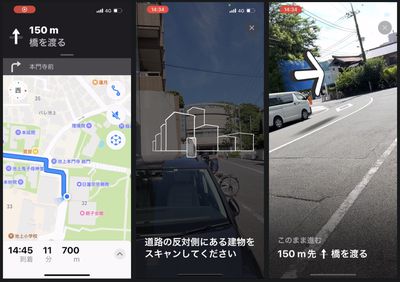 The AR mode can map walking directions onto the real world by using your iPhone's rear camera, making it easier to see where you need to go in built-up areas and reducing the need to look down at your smartphone as you move.

The feature's availability in Tokyo was discovered by Ata Distance, who also says other Japanese city maps may have been updated beyond Tokyo, but it's hard to know without being on the ground.

To initiate a walking route, ‌iPhone‌ users can raise their ‌device‌ and scan the buildings around them when prompted. The step-by-step directions will appear in the AR mode automatically, which should make it easier to get where you need to go, especially in situations where the directions are tricky.

MozMan68
I tried this out in NYC last year and was pretty impressed. Of course, I couldn't stop watching it as I was walking which you're not really supposed to do..Hah.

Do they work equally as well in English in Tokyo? Or Japanese in Toronto?

I suspect that I would want names of places, streets, etc. to be in both English and Japanese were I wandering round Tokyo. The English to understand, and the Japanese to compare with signs.

Most streets don't have names in Tokyo, so that's not really an issue. Apple maps (and Google, for that matter) already lists place names in English (romanized). I'll try out the AR walking thing later this weekend maybe.

lverg
Can’t wait to use this with AR glasses someday
Score: 1 Votes (Like | Disagree)

svish
Good to see it being available in another city too. But want it to be available in many more cities. Hope that happens.
Score: 1 Votes (Like | Disagree)

I tried this out in NYC last year and was pretty impressed. Of course, I couldn't stop watching it as I was walking which you're not really supposed to do..Hah.

I accidentally came across this in New York when getting into Manhattan and looking for my hotel, AR came up. Most iOS users never see these features and it's surprising when they come up in an app you thought you were so familiar with and use every day in your home city.
Score: 1 Votes (Like | Disagree)
Read All Comments

Monday June 6, 2022 1:42 pm PDT by Sami Fathi
Apple Maps is gaining support for multi-stop routing later this fall with iOS 16, while the updated Apple Maps experience will be expanding to 11 more countries. Later this fall, users will have the ability to plan trips with up to 15 stops and sync the trip between their iPhone and Mac. In addition, Apple Maps will soon be able to provide transit updates to users, including how much their...
Read Full Article • 48 comments

Tuesday April 19, 2022 3:01 am PDT by Tim Hardwick
Apple has added cycling directions for several parts of the Midwest, including Chicago, Detroit, Indianapolis, Cleveland, Columbus, Cincinnati, and Charleston. According to Apple Maps enthusiast Justin O'Beirne, the updated coverage reportedly includes all of Ohio and West Virginia, as well as parts of Illinois, Indiana, Michigan, and Virginia. Since the beginning of April, Apple has been ...
Read Full Article • 40 comments

Thursday April 14, 2022 4:12 am PDT by Tim Hardwick
Mark Zuckerberg wants to make Meta's forthcoming AR glasses an "iPhone moment" that will cast him and the company in a new light, according to a former employee who worked on the project. The comment was made to The Verge for a report outlining Meta's roadmap for AR glasses, which includes at least four different versions to be launched over the next six years. According to the report,...
Read Full Article • 128 comments