Apple's AirPods ruptured the eardrums of a 12-year-old boy in 2020 when a loud Amber Alert was issued, according to a lawsuit filed against Apple in California (via Law360). 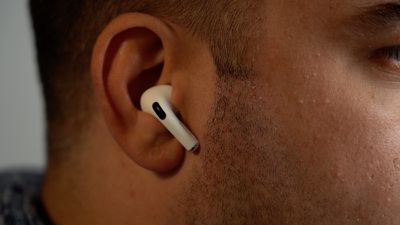 The child, identified as B.G. in the filing, was watching a movie on Netflix on his iPhone in 2020 while wearing AirPods Pro. The ‌AirPods Pro‌ were allegedly set at a low volume, but an Amber Alert sounded without warning and the high-pitched noise damaged B.G.'s eardrums.

The lawsuit claims that the Amber Alert "tore apart" B.G.'s eardrum, damaged his cochlea, and caused injuries to his hearing. He has since suffered from bouts of dizziness, vertigo, tinnitus, and nausea, and there is permanent hearing loss in his right ear, requiring him to wear a hearing aid.

Apple is accused of producing "defective" AirPods that do not automatically reduce the volume of alerts or equalize notification and alert volumes. The lawsuit faults Apple for failing to include warnings about the potential issue, and claims that Apple was aware of the alleged design defects.

As a direct and proximate result of each and all Defendants' negligence in designing, manufacturing, and marketing the defective AirPods, B.G. has suffered significant temporary and permanent, continuous injuries, pain and suffering, disability, and impairment. B.G. has suffered mental anguish, emotional trauma, physical harm, injuries, disability, and impairment in the past and that will continue into the future. B.G. has lost his ability to live a normal life, and he will continue to live a diminished life into the future, including a diminished earning capacity. Furthermore, B.G. has medical bills both past and future related to care arising from and relating to the injuries suffered as a result of the defective AirPods.

The lawsuit is seeking damages for B.G. and his parents, who are suffering from serious emotional stress caused by the AirPods incident. It asks for "punitive damages in amounts that would punish Defendants for their conduct and which would deter other technology companies from engaging in such misconduct in the future."

There have been other social media complaints about the noise of Amber Alerts when wearing AirPods. Amber Alerts are designed to catch the attention of ‌iPhone‌ owners, causing devices to play a loud sound and vibrate. Reports on the internet suggest that the Amber Alert sound is indeed very loud when played through AirPods, even when those AirPods are set at a reasonable volume.

Amber Alerts can be turned off in the Settings app by opening up the Notifications section, scrolling to the bottom, and tapping on the toggle to deactivate the alert. There are also options for turning off Emergency Alerts and Public Safety Alerts, though it is worth noting that alerts cannot be disabled in all countries.

The full AirPods complaint can be read on Scribd for those interested.

Kissmo1980
Those Amber alerts are irresponsible on how loud they are.
I was driving and both mine and my wife’s phones started screaming.
Almost made a car crash.

Idiotic mentality to put these at maximum. Why?????

Put a normal volume and a notification that will be persistent until dismissed.
No need to scream.

ToeCough
I've had to turn off Amber Alerts and Silver Alerts due to how buggy and misused they are. For example, I've had the same amber alert delivered to be every 5 minutes for an hour.

Just this week, Los Angeles residents received an evacuation order alert that was supposed to be just an internal test. I've lost all trust in the system.
Score: 51 Votes (Like | Disagree)

AdamNC
To burst an ear drum requires over 165db. I call absolute BS on this story. Parents just trying to make a buck.

The noise intensity to rupture an eardrum would have to be very loud, usually 165 decibels or more. This would correspond to the sound intensity of a gunshot at close range, fireworks or extremely loud music. Although the eardrum will heal, damage to the inner ear is often permeant.
Score: 49 Votes (Like | Disagree)

The lawsuit claims that the Amber Alert "tore apart" B.G.'s eardrum, damaged his cochlea, and caused injuries to his hearing

I'm surprised they didn't go the whole hog and claim that his head 'literally exploded'.
Score: 40 Votes (Like | Disagree)

Sedulous
I am a bit surprised these earbuds have enough power to do that kind of damage in a single “blast”. Even at full volume, it is unpleasant but far from blowing up the ear.
Score: 29 Votes (Like | Disagree)

now i see it
Here’s the fix