This week saw a good mix of Apple news and rumors, including an update for Apple's MagSafe Battery Pack that will let you charge your iPhone more quickly while on the go and some fresh iPhone 14 lineup rumors. 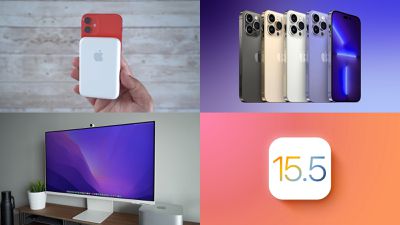 Other topics included Samsung's new M8 display as a competitor to Apple's Studio Display, a fresh round of operating system betas, and more, so read on below for all of the details!

Apple this week released a firmware update for the MagSafe Battery Pack that allows the battery pack to wirelessly charge an iPhone at up to 7.5W speeds, up from the previous 5W limit.

All four iPhone 14 models that are expected to launch later this year will likely feature an upgraded front camera with autofocus and a wider ƒ/1.9 aperture, according to Apple analyst Ming-Chi Kuo.

Kuo said these camera upgrades could result in an improved depth-of-field effect for Portrait mode photos and videos, while autofocus can enhance focus during video calls in apps like FaceTime and Zoom.

In other iPhone 14 rumors, we caught our first sight of case manufacturer molds for the lineup, giving us a better real-world idea of how the lineup will look as it transitions to two Max-sized models and no mini-sized model.

Samsung recently introduced the M8, a new 32-inch 4K display that's priced at $700, making it less than half as expensive as the Studio Display from Apple.

For one of our latest YouTube videos, we decided to compare the M8 to Apple's Studio Display to see how it performs and whether you can save some money by going with a cheaper option.

Apple this week seeded the second betas of iOS 15.5 and iPadOS 15.5 to developers and public beta testers. So far, these updates have only minor changes, such as tweaks to Apple Pay Cash.

Jon Rettinger, a YouTuber and founder of tech website TechnoBuffalo, joined us on The MacRumors Show podcast this week to take a deep dive into WWDC expectations and what we would like to see from Apple's forthcoming software updates.

Listen to The MacRumors Show via Apple Podcasts, Spotify, Overcast, Pocket Casts, Castro, Google Podcasts, or subscribe by copying our RSS feed directly into your podcast player. You can also watch a video version of the podcast on our YouTube channel.

In a letter to shareholders, Netflix said that its revenue growth has "slowed considerably," with the company faulting "a large number of households sharing accounts" and "competition" as reasons for the drop off.

Bull 07
Good weekend for everyone on this website god bless you.
Score: 2 Votes (Like | Disagree)
Read All Comments