How to Update Your MagSafe Battery Pack Firmware for Faster Charging

Apple has released a new firmware update for its MagSafe Battery Pack that improves iPhone charging speed. This article explains how to update it so you can benefit from improved performance. 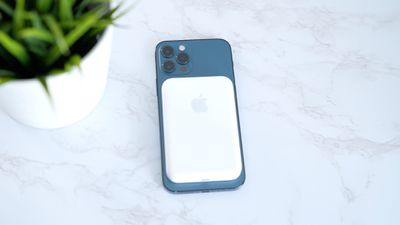 On April 20, 2022, Apple released a firmware update for the ‌MagSafe Battery Pack‌ that enables 7.5W charging on the go, up from the previous 5W limit.

While it still doesn't quite offer the 15W charging speed that wired MagSafe accessories provide, the improvement is at least equivalent to the fastest available standard Qi charging speeds on ‌iPhone‌, so it's well worth updating. Here's how.

The first thing to do is to check which firmware version your ‌MagSafe Battery Pack‌ is running.

There are two ways to update the firmware on your ‌MagSafe Battery Pack‌. The easiest way is to attach it to the back of your ‌iPhone‌ and it will automatically update, although this could take up to a week, according to Apple.

The second, faster way to update the firmware is to connect the ‌MagSafe Battery Pack‌ to a Mac or iPad using a Lightning to USB-C cable. Once you've hooked it up, provided the Mac or ‌iPad‌ is connected to Wi-Fi, the firmware update should only take around five minutes to complete. After that's done, you'll be able to enjoy the faster on-the-go charging speed immediately.

Apple Watch Ultra: How to Use the New Optimized Charge Limit Feature

Friday September 23, 2022 2:00 am PDT by Tim Hardwick
All Apple Watch models running watchOS 7 or later include a Battery Health feature called Optimized Battery Charging that extends the total battery life of your Apple Watch by learning from your habits and waiting to finish charging all the way up until you need your ‌Apple Watch. Apple Watch Ultra can last up to 36 hours on a single charge – the longest battery life of any Apple Watch ...
Read Full Article • 9 comments

Tuesday August 9, 2022 2:33 am PDT by Tim Hardwick
In iOS 16, Apple has introduced an option that lets you display the exact percentage of your iPhone's remaining battery in the status bar, even if you have a model with Face ID. This article explains how it works in iOS 16 Beta 5. Before now, the option to show battery percentage in the status bar has only been available on pre-iPhone X models and iPhone SE models that have no notch, where...
Read Full Article

AirPods Pro 2: How to Enable or Disable Charging Case Sounds

Friday September 23, 2022 7:44 am PDT by Tim Hardwick
With AirPods Pro 2, Apple has improved the Charging Case by adding a U1 chip for Precision Finding with Find My. This means there is a speaker built into the case that can emit a sound to help you locate it. However, the speaker also plays an audible chime whenever you start charging the Charging Case. The sound plays whether you connect the case to power via Lightning or place it down on a ...
Read Full Article • 11 comments

Thursday September 22, 2022 4:43 am PDT by Tim Hardwick
If you've just picked up a pair of AirPods, you'll probably want to customize their settings, and there are several configurable options you should be aware of that can only be accessed when you connect to an iPhone. It's worth noting that the way you get to AirPods settings on iPhone has recently changed slightly after the latest major iOS software update. In iOS 16, whenever you have...
Read Full Article

Wednesday September 14, 2022 3:19 pm PDT by Tim Hardwick
In watchOS 9, Apple has added a new Low Power Mode for Apple Watch Series 4 and later that is designed to extend the battery life of your device beyond the usual "up to 18 hours" of life on a single charge in normal use that Apple advertises. Keep reading to learn how the function works and how to enable it. For some years now, many Apple Watch fans have been clamoring for a new model that...
Read Full Article

How to Disable Rapid Security Response Software Updates on iPhone

Wednesday September 14, 2022 3:08 pm PDT by Tim Hardwick
In iOS 16, Apple can deliver security updates to iPhones without having to update the entire operating system. Keep reading to learn how it works and how you can disable it if you prefer. In the past, some of Apple's most important point releases of its iOS mobile operating system have been linked to critical security updates that are designed to keep you and your private data safe and...
Read Full Article

iPhone 14: How to Fix iMessage and FaceTime Issues After Activation

Friday September 16, 2022 3:16 am PDT by Tim Hardwick
Apple says some new iPhone 14 and iPhone 14 Pro owners may experience iMessage and FaceTime issues after setting up their phone out of the box. This article outlines some potential problems and how to resolve them. According to Apple, some people with new iPhone 14 models may be facing iMessage and FaceTime activation issues after setting up their phone. Some of the problems encountered may...
Read Full Article • 62 comments

Tuesday September 27, 2022 8:05 am PDT by Hartley Charlton
An Apple Watch Ultra user has modified their new device's casing to add a brushed finish and remove the orange color of the Action Button in an effort to make it more visually appealing. The Apple Watch Ultra offers the first complete redesign of the Apple Watch since the product line's announcement in 2014, and while the design has been met with praise from many users, some have criticized...
Read Full Article • 144 comments