Apple CEO Tim Cook today delivered the keynote speech at the Global Privacy Summit in Washington D.C. The conference, hosted by the International Association of Privacy Professionals, is focused on international privacy and data protection. 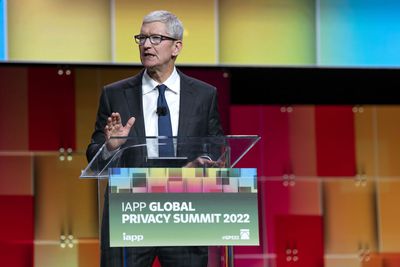 Cook reflected on Apple's ongoing commitment to privacy, which the company has repeatedly described as a fundamental human right.

"The fight to protect privacy is not an easy one, but it is one of the most essential battles of our time," said Cook. "We at Apple are proud to stand alongside all those who are working to advance privacy rights around the world. As a company, we are profoundly inspired by what technology can make possible, but we know too that technology is neither inherently good, nor inherently bad. It is what we make of it. It is a mirror that reflects the ambitions of the people who use it, the people who build it, and the people who regulate it."

Cook highlighted Apple's privacy features that give users control over their data, like App Tracking Transparency, but said he is "deeply concerned" about proposed regulations that would diminish these features and expose users to privacy and security risks. In the European Union, for example, the proposed Digital Markets Act would require Apple to allow sideloading of apps on the iPhone outside of the App Store.

"Here in Washington and elsewhere, policymakers are taking steps in the name of competition that would force Apple to let apps onto iPhone that circumvent the App Store through a process called sideloading," said Cook. "That means data-hungry companies would be able to avoid our privacy rules and once again track our users against their will. It would also potentially give bad actors a way around the comprehensive security protections we have put in place, putting them in direct contact with our users."

Cook said that Apple believes in advancing regulations that do not undermine privacy protections in the process.

"If we are forced to let unvetted apps onto iPhone, the unintended consequences will be profound," warned Cook. "And when we see that, we feel an obligation to speak up and to ask policymakers to work with us to advance goals that I truly believe we share, without undermining privacy in the process."

Cook's speech was streamed live on YouTube and begins around the 14:05 mark of the video.


Cook and other senior Apple executives, such as software engineering chief Craig Federighi, have repeatedly expressed the company's opposition to regulations that would require sideloading and third-party app stores on the iPhone.

MrGimper
"By checking this box, I confirm that I understand that sideloading apps will reduce the privacy and security of my data, and Apple will not be responsible for any privacy leakage"

va1984
I support Apple‘s side here 100%.
”Competition” for who can sell more of your private data doesn't need to be defended.
Forcing iOS to become as dodgy and scammy as Android doesn’t benefit anyone: if you want the perks of a more open system and are happy with the risks, there is already Android for you. Forcing everyone to act the same is not competition.
Score: 53 Votes (Like | Disagree)

HiVolt
They're just digging their heels in, instead of facing the fact that the monopoly they've had over app distribution is coming to an end.

It's all about the benjamins, nothing else.

Apple is still free to operate the App Store, charge the fees they charge for the developers that are happy with the agreement. And people are free to still only use the App store if they want to maintain the highest level of security and privacy.

The rest just want a simple choice. Apple can still be a part of making that choice safer.
Score: 48 Votes (Like | Disagree)

xRem
I don't buy it. Sideloading on Android works just fine and hey, all major corps are still putting their apps in the PlayStore. I don't see a single reason why that should be different on iOS. Sideloading is a hassle for users, so the majority of users will stick with the AppStore therefore no "big" company is going to skip the store for a different solution.
Score: 38 Votes (Like | Disagree)

"By checking this box, I confirm that I understand that sideloading apps will reduce the privacy and security of my data, and Apple will not be responsible for any privacy leakage"

I so hate the term side loading.... they are acting like its a new thing to install your own software without the manufacturer's permission....

As long as the software you install doesn't have direct access to cause trouble with the cellular network, I see no issue...
Score: 36 Votes (Like | Disagree)
Read All Comments