Apple last month released the fifth-generation iPad Air, with key new features including an M1 chip, 5G support for cellular models, an upgraded front camera with Center Stage support, and up to a 2x faster USB-C port for data transfer. As it turns out, Apple also made an internal change to the device that repair advocates may appreciate. 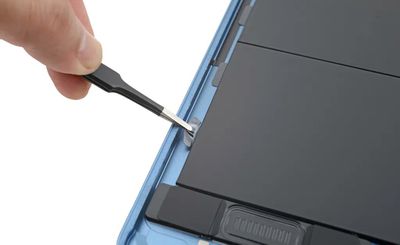 According to repair website iFixit, the new iPad Air's battery cells have stretch-release pull tabs on the underside for easier removal. In comparison, previous iPad Air models have completely glued-in battery cells that are more difficult to remove, with technicians commonly using a solvent like isopropyl alcohol to loosen the large amount of adhesive.

The pull tabs should make battery replacements easier for third-party repair shops and customers attempting do-it-yourself repairs, but Apple Stores and Apple Authorized Service Providers still replace the entire device when a customer needs a new battery for all iPad models, according to a source familiar with the matter.

The pull tabs could also have environmental benefits by making it easier for Apple's recycling partners to remove the battery from the iPad's aluminum enclosure.

Apple has been adding battery pull tabs to more devices, including the sixth-generation iPad mini and the latest 14-inch and 16-inch MacBook Pro models. However, despite having pull tabs, iFixit previously found that the iPad mini's battery is still glued down along the top and bottom edges, so it is not an entirely repair-friendly design. It's unclear if the new iPad Air's battery cells remain glued in to some degree as well.

Update - April 4: iFixit has confirmed the battery has no additional non-stretch adhesives. However, the BMS (battery management system) strip on the right edge of the battery is glued to the chassis and requires isopropyl alcohol to be loosened. iFixit added that the battery connector design continues to make it very challenging to disengage power from the device while it is being opened. iFixit has a special tool for this purpose.

sorgo
What do you call a little tab?

ChrisMoBro
I’m so fed up of Apple’s PR BS of “we use plastic free packaging and don’t give out plugs because we’re doing our bit for the planet” and yet they replace entire iPads when it is easier to just replace the battery. It’s disgusting. Maybe they don’t give out plugs anymore because they're trying to offset all the e-waste generated by stupid decisions like this and making devices that can’t be upgraded (Mac Studio) or thrown away once the battery is depleted (AirPods). Yes I know they get recycled but that isn’t the solution as it generates a lot of CO2. The answer is to make products that can be serviced by end users and Apple in a way that prolongs the lifecycle of the products.
Score: 18 Votes (Like | Disagree)

Mega ST
The EU is currently preparing a new requirement that demands "every" battery powered device including mobile phones to have replaceable batteries that can be changed by the user from 2024.

The iPad battery replacement prices cost still the same. No changes on that. It just makes it easier for the technician to do a job quicker. ?

That is because Apple Stores and Apple Authorized Service Providers still replace the entire iPad when a customer needs a new battery. The new pull tabs really only benefit third-party repair shops and customers who attempt do-it-yourself repairs. My understanding based on iFixit's teardowns over the years is that iPads are difficult to repair because they contain large amounts of adhesive everywhere.
Score: 14 Votes (Like | Disagree)

mlody
Would be nice if Apple also included battery health info for ipads
Score: 9 Votes (Like | Disagree)
Read All Comments