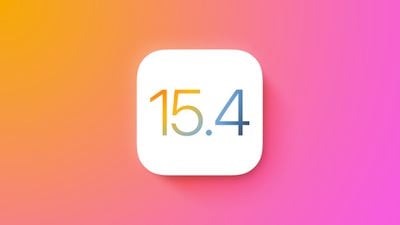 Developers can download iOS 15.4 and iPadOS 15.4 through the Apple Developer Center or over the air after the proper profile has been installed on an iPhone or iPad.

iOS and iPadOS 15.4 introduce some of the most significant changes we've seen in an update since iOS 15 launched. On the iPhone 12 and 13 models, there's now an option to use Face ID while wearing a mask with no Apple Watch required for authentication. It works just like Face ID, but it scans the area around your eyes when you're wearing a mask.

On ‌iPad‌, iPadOS 15.4 brings the long awaited Universal Control feature. Paired with a Mac running macOS Monterey 12.3, Universal Control allows multiple Macs and iPads to be controlled with a single cursor and keyboard. It's a feature that works seamlessly after installing the updates, and it is simple and intuitive to use.

There are 37 new emojis with the addition of Emoji 14 characters, so you can now use emojis that include melting face, biting lip, heart hands, bubbles, beans, face with diagonal mouth, palm up hand, eggs, troll, low battery, coral, lotus, and more.

The second beta added support for the "Tap to Pay on ‌iPhone‌" feature that is designed to allow NFC-compatible iPhones to accept payments through Apple Pay, contactless credit and debit cards, and other digital wallets, without requiring additional hardware.

Tap to Pay on ‌iPhone‌ is enabled in the iOS 15.4 beta, but it does require third-party providers to add support, so it is not yet available for use.

There are also signs that Apple may be planning to roll out support for digital IDs and driver's licenses in iOS 15.4. There isn't a ton of evidence for this at the current time, but there was a mention of the feature in the PassKit code in beta 2. "Find out when your driver's license or state ID is ready to use and get important updates about your ID," it reads.

Other new features include full 120Hz ProMotion support for app animations on iPhone 13 Pro models, EU vaccine certificates in the Wallet app, the ability to turn off notifications for Shortcuts automations, keyboard brightness controls in Control Center on the ‌iPad‌, an Apple Card widget, iCloud Keychain notes, support for adding custom email domains to ‌iCloud‌ Mail right on device, and a SharePlay option in the share sheet.

We have a full list of all of the features introduced in iOS 15.4 and iPadOS 15.4 in our dedicated guide highlighting everything new in the update.

Update: Apple has also made the iOS 15.4 and iPadOS 15.4 betas available for public beta testers.

srbNYC
Is that terrible bug that I hate but won't describe fixed yet?
Score: 9 Votes (Like | Disagree)

Lounge vibes 05
Just as I thought.
RC probably next week, and then public release on or around March 8
Score: 4 Votes (Like | Disagree)

Reminders did not sync on last weeks betas for me. But everything else depending on iCloud was working fine. Hope this is fixed.

It’s working for me now, so I believe it was fixed.
Score: 4 Votes (Like | Disagree)

djgamble
Side note, I wonder what version this would be if Apple still used the older style of version numbering (i.e. a major release every ~3-5 years with point releases in between rather than calling 1 release each year a point release).

To me the silly thing about the new style is that we're just gonna end up with huge numbers and a heap of confusion. Whereas if this was (for example) iOS 3.5.4 then it'd be easier to remember numbers (and note that it's just a random point release of iOS 3).

Same with MacOS (or OS X... or macOS... whatever the hell it is). I'm not 'Murrican so the names are just a blur to me. Which version is Catalina/Big Sur/El Capitan/Monterey, Yosemite, Sierra... HIGH Sierra...etc? No idea. Is Monterey better than Big Sur as a place to visit? (At least with cats you can go from small to big... 'Murrican landmarks? Hrrrrm). I feel like we hung onto MacOS X for too long and now we're just calling little point releases 11... 12...etc. Less names/numbers would be good thanks Apple :D
Score: 3 Votes (Like | Disagree)

macduke
I desperately want a digital driver's license so I can ditch my wallet, but my state is so ass-backwards that it will probably be another decade.
Score: 3 Votes (Like | Disagree)
Read All Comments

Wednesday October 27, 2021 10:15 am PDT by Juli Clover
Apple today seeded the first betas of upcoming iOS and iPadOS 15.2 updates to developers for testing purposes, with the new software coming one day after the launch of iOS 15.1 and iPadOS 15.1. iOS and iPadOS 15.2 can be downloaded through the Apple Developer Center or over the air after the proper profile has been installed on an iPhone or an iPad. According to Apple's release notes for...
Read Full Article • 23 comments