The second beta of iOS 15.4 adds code for the new "Tap to Pay" feature that Apple announced this morning. "Tap to Pay on iPhone" is designed to allow NFC-compatible iPhones to accept payments through Apple Pay, contactless credit and debit cards, and other digital wallets, without requiring additional hardware. 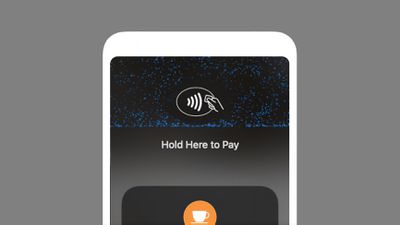 Tap to Pay on ‌iPhone‌ is enabled in the latest beta, but it does require third-party providers to add support, so it is not yet available for use. There are no outward-facing signs of it that are visible to end users, but there's a new "PaymentReceived" sound file and images that show off the Tap to Pay interface.

MacRumors contributor Steve Moser has also discovered references to a "ContactlessReaderUIService" in the code, as well as mentions of alerts that end users will see. The feature will support reward passes and refunds.

The Tap to Pay feature will work with the ‌iPhone‌ XS or later, and will allow supported iOS apps to accept ‌iPhone‌ to ‌iPhone‌ payments. At checkout, a merchant is able to prompt a customer to hold their ‌iPhone‌, Apple Watch, contactless credit or debit card, or other digital wallet close to the merchant's ‌iPhone‌ to complete a payment over NFC.

Stripe has announced that it will be the first payment platform to offer Tap to Pay on ‌iPhone‌ to business customers, including Shopify users, later this spring. Apple Stores in the U.S. will also roll out support for the feature later this year.

I love it. Can’t wait to find out what real-world usage is going to be like. Hoping for easy and seamless transactions through the iPhone. It’s that easy! ? ? ❌

Real-world it's not changing much for existing businesses because you need to be a merchant to accept payments, this isn't for you sending money to grandma or whatever.

Most likely it'll help restaurants or others to have employees carry an iPhone to the table to accept payments instead of taking your card to a POS terminal. But for non-contactless cards they will have to go to the terminal.

I thought it can be used with Apple Cash? That should mean everyone can begin using it right away, unless I misunderstand.

You misunderstood. This is an option for Stripe and other payment processors to accept payments. It's not for sending money person to person. Or if you mean can you pay with Apple Pay Cash, then yes, Apple Pay Cash is a contactless debit transaction that can be processed like any other contactless debit. Funny enough tons of readers don't take it though because it's using Discover contactless and the program is different for Discover over Visa and Mastercard and not every reader understands Discover contactless.
Score: 7 Votes (Like | Disagree)

TheYayAreaLiving ?
I love it. Can’t wait to find out what real-world usage is going to be like. Hoping for easy and seamless transactions through the iPhone. It’s that easy! ? ? ❌
Score: 6 Votes (Like | Disagree)

genovelle
You will still need a swiper or chip reader for the millions of cards that don’t have wireless capabilities. They could also send them a quick invoice from the App and they can enter their information And pay that way.
Score: 3 Votes (Like | Disagree)

LeadingHeat
I wonder if they’re holding out on allowing Apple Pay peer to peer to work using this until some third party vendors are utilizing it. For all the FTC vultures out there ready to pounce on “anticompetitive” claims.

This seems like a no brainer to add for Apple Pay. Easier than texting someone, plus can be done with strangers. (Yard sales, Craigslist, etc)
Score: 3 Votes (Like | Disagree)

This is just an API/SDK. They can easily write their own app to utilize this.

This...Square will just save money by not having to provide hardware for iPhones/iPads. Will still work!
Score: 2 Votes (Like | Disagree)

ApfelKuchen
Third World countries? This is similar to the countries that had minimal wired rural telephone service and only achieved "universal" phone service with the advent of cellular technology.

Developing economies have a tendency to skip expensive intermediate technologies (like dedicated card readers) and implement lower-cost/higher-tech solutions sooner. In rich countries banks and card processors can force their merchants to use higher-cost terminal systems (that they sell to the merchants). There's more vendor push-back in developing economies, for obvious reasons. So if the banks/processors want the big bucks (skimming a percentage of every transaction) that they get from near-universal implementation, they may have to forgo the ancillary revenues from selling card readers/terminals in order to gain that vendor acceptance.

This is another step towards the "death of cash." Governments prefer all financial transactions be visible/traceable (and potentially taxable). Banks prefer to not handle/safeguard cash. All but mom-and-pop businesses prefer that their employees not handle cash. So if the smart phones already in the hands of nearly the entire population can be used to reduce the use of cash in business... it's going to happen.
-----

Sometimes Apple uses its hardware/software platforms to create new services, sometimes they add new features to the for the sake of encouraging wider adoption of its hardware (once they have the hardware, they have an opening for selling unrelated services). I think this will turn out to be the latter - selling more iPads and iPhones to merchants, field service workers (plumbers, appliance repair, etc.).

Still... While for now this is all about accepting tap-to-pay cards, it will undoubtedly extend to receiving Apple Pay payments as well. Why would an Apple Pay user accustomed to tapping their Watch or iPhone on a payment terminal want to go back to pulling a card out of their wallet? Of course Apple Pay has been delivering a revenue stream to Apple since Day One.

Not only does this sell more devices to business, but as Apple learned long ago in the personal computer business, consumers tend to buy the same equipment they use at work for their at-home use. MS-DOS/Windows PCs at work, the same at home.

Altogether, Apple's control over software and hardware means that when they do offer a new capability like this, they're able to roll it out across several generations of product, not just the latest. Rapid adoption can be critical - an overnight software roll-out to an already-installed hardware base can translate to a one- or two-year head start over the fractured Android market. And once merchants are accustomed to using iPhones/iPads for direct payment, they're not going to be in a hurry to switch platforms.

=====
Getting back to government for a minute. Despite various government attempts (pushed by Apple's competitors, of course) to open Apple's platform, Apple's arguments for security/privacy tend to be supported by banks and other financial institutions. So an Apple that is a government ally in reducing/killing the cash economy is unlikely to get major regulatory pushback on maintaining a closed hardware/software environment. If Treasury says to Consumer Protection, "We need this to be locked down," Consumer Protection will start advocating the closed system as a form of consumer protection.
Score: 2 Votes (Like | Disagree)
Read All Comments

Tuesday February 8, 2022 9:28 am PST by Joe Rossignol
Stripe today announced a closed beta program for Apple's upcoming "Tap to Pay on iPhone" feature, with a sign-up form available on its website. The payment platform said the feature is "coming this spring" in the United States. Tap to Pay on iPhone will allow newer iPhones to accept payments via Apple Pay, contactless credit and debit cards, and other digital wallets, with no additional...
Read Full Article • 28 comments