Earlier this week, Apple began requiring that customers taking advantage of educational discounts in the United States verify their status as a teacher, student, or school staff member through UNiDAYS. 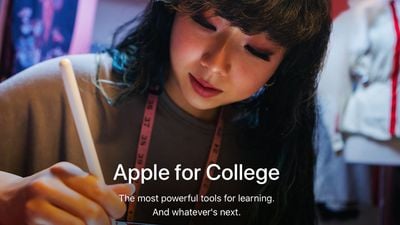 The requirement was a major change as Apple had never asked customers to go through a verification process in the United States before, and now, just three days after verification was added, Apple has removed it.

As of today, discounted iPads, Macs, and other products can be purchased from Apple's education website in the U.S., and Apple is not asking for any proof that a customer is a student or teacher.

After the UNiDAYS requirement rolled out, there were complaints from some MacRumors readers that suggested the UNiDAYS site was broken for staff member verification, as it was asking customers to upload a student ID with an expiration date. Staff members were prevented from obtaining discounted products, which could be why Apple has nixed the requirement.

It is not clear if Apple will reimplement an institution verification process after working out kinks to make it available for students, teachers, and school staff, but for now, there is no requirement to make a discounted purchase.

Apple has long required UNiDAYS verification in countries like the United Kingdom, so it would not be too much of a surprise to see it added again as a requirement in the United States at some point in the future.

appleArticulate
Wait...there is no verification process for the EDU pricing??
Score: 32 Votes (Like | Disagree)

johnediii
As a homeschooling parent, I don't particularly care, but would prefer that the make a path for us as well.
Score: 27 Votes (Like | Disagree)

antiprotest
I never knew that Apple did not ask for verification. So now that they announced it many people who never tried to cheat the system will begin to.
Score: 20 Votes (Like | Disagree)

zorinlynx
Not sure why they can't just require the purchaser to have a university E-mail address from an approved list. That's how other sites have been verifying university affiliation for years.
Score: 18 Votes (Like | Disagree)

TheYayAreaLiving ?
I’m so happy Apple has decided to remove it. It was a total waste of time in the first place. Maybe Apple VP saw the sales have started to decline.

Honestly, A 3 trillion-dollar company is relying on some third-party website for verification? That’s wrong! ??
Score: 17 Votes (Like | Disagree)

nquinn
Just ran into this with my mom who is a teacher. It's kind of ridiculous because the home screen says it's for both staff and students, but literally every other verification form is around student ID's and information only.
Score: 14 Votes (Like | Disagree)
Read All Comments