Despite mocking the display notch when it first appeared on the iPhone X, Samsung's opinion of notches appears to have swung from one extreme to the other as the company now thinks they don't look so bad on tablet devices either. 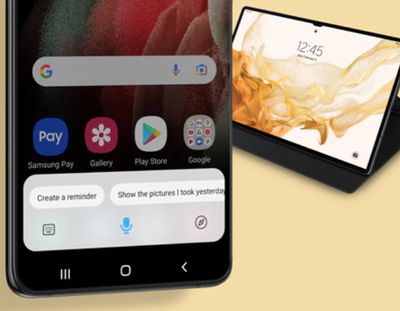 Spotted by 91Mobiles, the picture above briefly appeared on a Samsung support page for Bixby and shows the notched design of the upcoming Galaxy Tab S8 Ultra, the company's next flagship Android tablet. Notches on Samsung smartphones have appeared in the past, but this is the company's first flagship tablet device to feature one.

The small cutout sits at the top of the display when in landscape orientation, and is said to house two 12-megapixel selfie cameras, with the second sensor potentially being ultra-wide for group selfies. Presumably either Samsung has prioritized ultra-slim bezels which don't provide enough space to house the cameras, or the company has chosen to locate them prominently in a notch as a form of visual branding.

Coincidentally, the notched screens look vaguely reminiscent of the displays on Apple's latest 14-inch and 16-inch MacBook Pro models, except the cutout always stays at the top of the screen on Apple's Macs, whereas on a tablet the notch will switch location depending on the held orientation.

Apple has worked to reduce the size of the notch on successive smartphone models, and is expected to replace it completely in the iPhone 14 Pro in favor of hole-punch and pill-shaped cutouts in the display. As for Apple's tablets, the company has completely avoided notches on its iPad Pro models by hiding the camera sensors in the bezel, and for devices where it has been unable to do the same with Face ID sensors, it has opted for Touch ID in the power button instead, such as in the iPad mini 6.

For what it's worth, MacRumors has seen concept renders of alleged future iPads with a notch located at the top of the display when the device is held in portrait orientation. Apart from the fact that the sources were not reliable, we don't expect Apple to adopt a tablet design that encroaches on what is already an unobstructed display. Apple has also likely factored in the different use cases for iPads, with users switching the screen orientation of a tablet more often than they do with a smartphone.

Render of Samsung's upcoming Galaxy Tab S8 Ultra (Image credit: @OnLeaks)
The Galaxy Tab S8 Ultra is said to have a 14.6-inch OLED display with an under-screen fingerprint sensor, a 120Hz refresh rate and a resolution of 2,960 x 1,848. The Android tablet is also expected to feature up to 16GB of RAM, up to 512GB of storage, S Pen stylus support, and optional 5G support.

The Ultra device is thought to be the top-tier device in a three tablet lineup that includes the Tab S8 and Tab S8 Plus, all of which could appear alongside Samsung's new Galaxy S22 smartphone series at a rumored launch event next month.

Belisarius
Samsung really is the most unintentionally hilarious company in the world. If the next iPhone featured razors that popped out and cut you, guaranteed Samsung’s would do the same one year later.
Score: 19 Votes (Like | Disagree)

“It doesn’t bother me I barely notice it’s there” - sure, it’s still going to be looked back on and laughed at as one of those weird periods in tech.

Krypton Deer
have been saying this since iPhone X - the notch is not ideal, but a good compromise until we have perfect under-display camera. And it's not noticeable in daily use. However, it is from Samsung, so I will just leave this here. :cool: