iPhone 14 Pro models will feature a 48-megapixel camera, according to Taiwanese research firm TrendForce. Specifically, this refers to the rear-facing Wide camera, which is currently 12 megapixels on iPhone 13 Pro models. 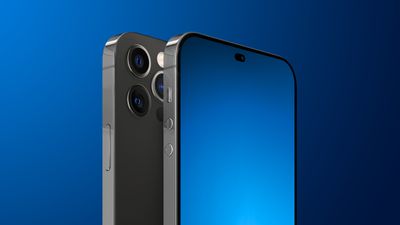 The addition of a 48-megapixel Wide camera on iPhone 14 Pro models has already been mentioned by multiple sources, including analyst Ming-Chi Kuo, who expects the upgraded camera to support 8K video recording.

Simply increasing a smartphone camera's megapixel count while maintaining the same image sensor size results in smaller pixels, which allows less light to be captured, resulting in lower-quality low-light photos. As a solution, Kuo has previously said that iPhone 14 Pro models will support both 48-megapixel and 12-megapixel output, which would likely be achieved with a process known as pixel binning.

Already in use on some Android phones like Samsung's Galaxy S21 Ultra, pixel binning merges data from multiple smaller pixels on the camera's image sensor into one "super-pixel" for improved low-light sensitivity. Pixel binning would allow iPhone 14 Pro models to shoot high-resolution 48-megapixel photos in bright conditions and 12-megapixel photos in low-light conditions that are still of higher quality.

Given the physical size of phones now, a larger sensor is overdue. Larger sensor > megapixels in this context. A 1" sensor in combination with computational software would make for one impressive phone camera.

The depth of the phone is far more an issue with getting a larger sensor than the length and width. That's what's held not just the iPhone but most every smartphone back from offering a larger sensor. You're talking about needing to much more than 2x the thickness of the phone to offer such, without setups like the telescoping lens that's been rumored for several years now.
Score: 12 Votes (Like | Disagree)

MrRom92
I for one would not mind a thicker phone if it meant doing away with the camera bump. Thicker battery too! Or maybe better cooling meaning they can push the next chip even harder… lots of possibilities and ultimately a much more elegant design. USB-C too, I can dream right? Or at least upgrade lightning to support usb 3.0 speeds… it’s a PRO device!
Score: 10 Votes (Like | Disagree)

nyzwerewolf
Can we get a larger sensor instead please??!?!?
Score: 10 Votes (Like | Disagree)

TechRunner
Given the physical size of phones now, a larger sensor is overdue. Larger sensor > megapixels in this context. A 1" sensor in combination with computational software would make for one impressive phone camera.
Score: 5 Votes (Like | Disagree)

Macintosh TV
I just don't see them jumping that much in a single generation.
Score: 5 Votes (Like | Disagree)

I knew it would need to be bigger, but would it need to be twice as thick? I'm not being combative here; I'm curious as my engineering knowledge is limited.

Looks like Sharp has done it in a 10.5mm thick phone, so you're looking at about 40% thicker than the current iPhones. But that's also assuming they utilized the exact same camera module, which Apple wouldn't. Still a pretty big jump in thickness. Especially considering this additional camera benefit is something most users wouldn't get much from. I don't see Apple trading that for this.
Score: 4 Votes (Like | Disagree)
Read All Comments

Monday December 20, 2021 6:36 am PST by Joe Rossignol
Apple plans to add a 48-megapixel camera lens to the iPhone next year, followed by a periscope lens in 2023, according to analyst Ming-Chi Kuo. In a research note today with TF International Securities, obtained by MacRumors, Kuo said these iPhone camera upgrades over the next two years will help to boost Taiwanese manufacturer Largan Precision's market share, revenue, and profit. Kuo did ...
Read Full Article • 97 comments

Tuesday January 18, 2022 10:35 am PST by Juli Clover
Verizon and AT&T's upcoming rollout of new C-Band 5G technology could cause chaos and lead to widespread delays of passenger and cargo flights, major U.S. airlines said on Monday in a letter sent to the White House National Economic Council, the FAA, and the FCC (via Reuters). "Unless our major hubs are cleared to fly, the vast majority of the traveling and shipping public will essentially...
Read Full Article • 183 comments