Apple Music is now available to stream on Google Assistant-enabled devices like the Nest Mini and Nest Audio in five more countries, including Australia, Canada, India, Mexico, and South Korea, according to a recently updated Apple support document. 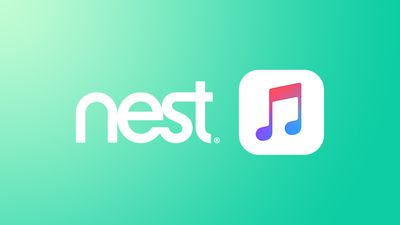 Just like with Siri on the HomePod, Apple Music subscribers can ask Google Assistant to play songs, albums, and playlists, and it's also possible to set Apple Music as the default music service to avoid saying "on Apple Music" for each request.

Set up Apple Music on your Google Nest device

1. On your iPhone, iPad, or Android device, open the Google Home app.
2. Tap Settings.
3. Tap Music.
4. Under "More music services," tap the Link icon next to Apple Music.
5. Tap Link Account.
6. Sign in with the Apple ID that you use with Apple Music and follow the onscreen steps to complete setup.

Google shared more details about this rollout in a blog post first spotted by iPhone in Canada.

TheYayAreaLiving ?
That’s cool but too bad don’t have a Google Nest.
Score: 3 Votes (Like | Disagree)

stocklen
So if Apple are now playing nice with Google Nest...

Will Google Nest play nice with Apple in return and adopt HomeKit support for their Thermostats, Cameras, and Doorbells at last?!
Score: 3 Votes (Like | Disagree)

satchmo
I guess this is one reason for Apple Music’s Voice plan.
Score: 2 Votes (Like | Disagree)

Try asking your Nest Mini to play one of your own playlists. It doesn’t work for me. It plays a similar sounding playlist from Apple Music. Not the one I created. I’m in Canada.

Yes, I noted this in the old, original thread yesterday - this appears to be set up to only respond to verbal requests to play artists and/or albums. I can't even get it to play an Apple-created playlist (at least, not the ones to which I subscribe in my Apple Music).
Score: 2 Votes (Like | Disagree)

FelixDerKater
Nest? Google Home? Aren't they in the process of killing off the Nest brand?
Score: 1 Votes (Like | Disagree)
Read All Comments