Apple has resumed the sales of its products in Turkey just days after shuttering its sales operation following the Turkish lira collapsing against the U.S. dollar and rising economic concerns. With the resumption of product sales, Apple has also significantly increased the price of all of its products in the country as a result of inflation. 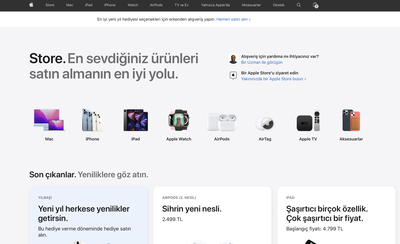 Over the past week, the Turkish lira has collapsed in value against the U.S. dollar, causing Apple to suspend product sales in the country. Now, Apple has reopened sales operations in Turkey for its online store, and presumably, in retail stores. This week, customers were also reportedly being turned down at Apple Stores in the country's largest city, Istanbul.

For updated information on new pricing, be sure to check out Apple's Turkish store front.

Could happen here too. Higher prices on APPLE products.

I firmly believe that after the holidays are over we head into a recession. Some exports are saying the recession could last as long as 5 years.

With Biden it’s guaranteed to happen.
Score: 30 Votes (Like | Disagree)

I don’t wish to start an argument but I believe the country I live in should get to determine its own laws and future and not be subservient/dictated to, by a ‘higher’ entity. I have the ability to vote for a new prime minister, should the one in power not do as he said he would do before being elected (whether everyone else agrees is another matter). I’m not sure the same can be said about certain European officials and the directives that are handed down.

We always had the right to vote for a new Prime Minister and it's clear they're not doing what they got voted in for, but we have a 2 party first-past-the-post system where people vote for who they think is the least worst of the two biggest, regardless how bad they are.

We also had our soverign rights and still had control of our borders. If you want to trade freely you always have to have some parity across shared laws and rights so as not to have an uneven and unfair trading disparity. If you design a product in the UK you still need to make it meet CE and FCC and other worldwide laws if you're going to sell it there. Similar goes for food and farming.

We've ended up with Johnson who's a feckless idiot and has a history of being repeatedly sacked from jobs for being a liar and even half his own party said he was a terrible foreign secratary, but they voted him in because they though it might help the party popularity as the "most famous" of them. The only thing he should be responsible for controlling is the panel of "Have I Got News For You" where his idiocy was harmless comedy fun. Great. At least if they'd voted in Rory Stewart as leader we could have ended up with someone with at least 2 brain cells between his ears (regardless of if I agreed with his politics or not), but populism seems the order of the day. This country is largely ran by the tabloid media and idiots unfortunately, so Brexit was more a result of the likes of Rupert Murdoch making us get rid of the part of government they couldn't tell what to do. Murdoch even said before he didn't like the EU as he could basically tell everyone who to vote for and put in power in the in the UK government or destroy their careers, but not really influence the EU.

Now we're poorer, have less rights and a lot of trouble in Northern Ireland and business has been made a lot more difficult in some circumstances for the company I work for (and for many of my friends, some of them European who have lived here for years and contributed greatly to our economy).

The EU has many issues and problems, but it was a lot better than not being a part of it. We now no longer have a say in the biggest, most powerful trading block right next to us, so have become a weaker country as a result.

Looks like the beginning of your first sentence failed. But I couldn't be arsed to argue about this nonsense any more, so don't expect any more replies from me on the subject. But I can't not at least reply once to someone who thinks Brexit has somehow empowered us, when in reality it's made us a more disliked, harder to trade with, poorer and more minor power in the world.

(For the record if you want a simple example, since some people still think jolly old Blighty is better off against all evidence, I'm sat next to an expensive point-to-point wireless system that we got screwed on import duty for to do some R&D on, and failed to get the test contract because it was a massive pain in the ass and too slow to get through customs. Previously it would have taken about 2 days and we could easily sent it back and forth. That's just one of many more examples.)
Score: 17 Votes (Like | Disagree)

BootsWalking
Turkey is fighting inflation caused by an exploding money supply by lowering interest rates so that even more money will be borrowed and created. This is why The Onion isn't popular anymore - it's hard for a satirical news outlet to compete with the absurdity of modern reality.
Score: 16 Votes (Like | Disagree)

I don’t wish to start an argument but I believe the country I live in should get to determine its own laws and future and not be subservient/dictated to, by a ‘higher’ entity. I have the ability to vote for a new prime minister, should the one in power not do as he said he would do before being elected (whether everyone else agrees is another matter). I’m not sure the same can be said about certain European officials and the directives that are handed down.

Exporters do, but unfortunately, it is only short term.

Erdogan is really crashing Turkey at the moment, and for some reason, a lot of people loves it. I assume they are equivalent of the people who are just now realising what Brexit has done for them.

I don’t wish to start an argument but I believe the country I live in should get to determine its own laws and future and not be subservient/dictated to, by a ‘higher’ entity. I have the ability to vote for a new prime minister, should the one in power not do as he said he would do before being elected (whether everyone else agrees is another matter). I’m not sure the same can be said about certain European officials and the directives that are handed down.
Score: 13 Votes (Like | Disagree)
Read All Comments