Apple today released the third beta of an upcoming iOS 15.2 update to developers for testing purposes, and the Cupertino company is continuing to refine features ahead of the software's release. Beta 3 doesn't add as many new features as prior betas, but there are some notable changes. 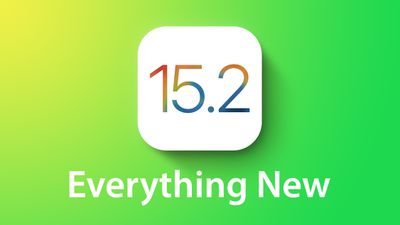 Apple has added a long-awaited feature that allows Apple Music users to search within playlists.

For the iPhone 13 Pro and Pro Max models, there's a Macro option for taking close-up photos with the Ultra Wide lens. Apple has been tweaking controls for macro mode in the iOS 15.2 beta, and has clarified the settings available for the feature in the third beta.

There's a renamed "Macro Control" toggle in the Camera section of the Settings app that makes it clear that users can toggle on the manual macro feature that was added in the second beta.

"Show Camera control for automatically switching to the Ultra Wide lens to capture macro photos and videos," reads the description of the toggle. With this enabled, ‌iPhone 13 Pro‌ and Pro Max owners can tap on a little flower-shaped icon in the Camera app to toggle on Macro mode when close to an object. This was introduced in the second beta, but it was confusing because Apple had not yet updated the wording for the toggle in the Settings app.

In the Cellular and WiFi sections of the Settings app, Apple has clarified the iCloud Private Relay wording. The toggle, which was previously called "‌iCloud‌ Private Relay" has been renamed to "Limit IP Address Tracking" to make it clearer what happens when it's turned on.

The general functionality is the same, and this is just a clarification to the wording.

According to Apple's release notes, tags can be bulk renamed and deleted in the Reminders app.

There are a few remaining bugs in the beta. From Apple's release notes:

Know of new feature in the third beta of iOS 15.2 that we left out? Let us know in the comments.

I bet 99% of the users don't know that it also encrypts every DNS request (even on other browsers) on iOS/iPadOS. So you don't need to use secure DNS app/profile.
Score: 10 Votes (Like | Disagree)

There is an option in cellular settings to convert to esim.

I have a SIM card.

Wonder if this will allow me to pop out the sim and use my number still.

This option has been around a while. My suggestion would be to NOT do this unless you have a good reason.

For example, say you have an old iPhone 5 in a drawer as a spare... if you convert to eSIM you won't be able to move your SIM to it if your main phone suddenly dies. Having a physical SIM is usually more flexible as to what you can do with your cellular plan than an eSIM.

Another thing is keeping your eSIM slot open allows you to try other carriers easily, like the recent T-Mobile test drive.
Score: 4 Votes (Like | Disagree)

Kylo83
It not a very interesting update
Score: 3 Votes (Like | Disagree)

If you prefer it with a bit more flexibility shoot in RAW or snag Halide. You don't have to live in a hellish state.
Score: 2 Votes (Like | Disagree)

TheYayAreaLiving ?
Can’t wait! Hopefully it’s out before November is up.
Score: 2 Votes (Like | Disagree)

SFjohn
I, and I think many other usual public beta testers are not signing up for betas after certain disheartening comments from Apple. And now when these software updates are released they don’t have all the testing they once had, leaving us with less than stellar software updates.
Score: 2 Votes (Like | Disagree)
Read All Comments