In an interview with The Wall Street Journal's Joanna Stern, a pair of Apple executives have addressed what is probably the most contentious and talked about features missing on the Mac - Face ID and touchscreen input. 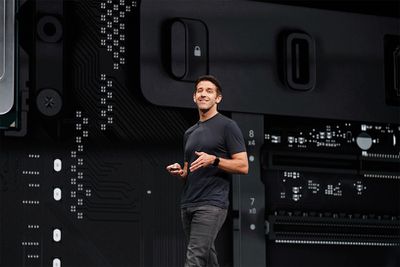 One of the biggest criticisms of the Mac is the lack of ‌Face ID‌. Since ‌Face ID‌'s launch on the iPhone X, some have wondered if Apple will ever bring it to the Mac. A report earlier in the year suggested it will happen in the future, but the new 14-inch and 16-inch MacBook Pros with the notch, and the lack of ‌Face ID‌, have brought the debate back to the mainstream.

Addressing why the Mac lacks ‌Face ID‌, Tom Boger, Apple's vice president of iPad and Mac product marketing, told Stern that Touch ID is more convenient on the Mac since users' hands are already on the keyboard.

‌Touch ID‌ on the upper-right hand corner of the keyboard lets users easily authenticate by just placing their finger on the sensor. Still, ‌Face ID‌ on the Mac would presumably be even easier, as the Mac would unlock once a user looks at the display, similar to ‌Face ID‌'s behavior on the ‌iPhone‌ and ‌iPad‌.

And Face ID? When I stare at the laptop's giant notch, I wonder why I can't unlock the machine with my face. Mr. Boger said Touch ID is more convenient on a laptop since your hands are already on the keyboard.

Another hot topic of debate surrounding the Mac has been touchscreen capabilities. The notion has been that if Macs were to gain touch input, it would cannibalize ‌iPad‌ sales. John Ternus, Apple's senior vice president of hardware engineering, seemingly agrees and said that it's not something Apple has felt the need to do.

Ternus and Boger also addressed more specific questions about the newly launched 14-inch and 16-inch MacBook Pros and Apple silicon in general. Recent MacBooks feature non-user upgradeable RAM, so the amount of RAM can't be upgraded down the line if a user finds they need extra memory than what shipped with the computer.

The new MacBook Pros brought back many features enjoyed by Mac users that were taken away during the laptop's redesign in 2016. Most notably, Apple has brought back additional ports such as HDMI and MagSafe, removed the Touch Bar, improved the displays, and more.

Speaking generally to the reversal of changes this year, Boger told Stern that Apple is always "listening to its customers," which meant it ultimately needed to undo some of its previous Mac design decisions.

“We’re constantly listening to our customers and with this new lineup of MacBook Pros we decided to make some changes as we do a lot on the Mac,” Tom Boger, Apple’s Vice President of Mac and iPad Product Marketing, told me.

Run that through the executive-to-English translator and it comes out pretty clear: We were wrong.

ruka.snow
I am glad they aren't putting stupid touch screens on Mac's, lets leave that to the $300 Walmart special.
Score: 107 Votes (Like | Disagree)

as if your face is anywhere but in front of the screen when you are using said laptop...

what a dumb excuse - plus if you are right handed your hand is likely on the mouse or trackpad when a Face ID prompt shows up, so it's actually less convenient to lift the hand and use the touch sensor.
Score: 93 Votes (Like | Disagree)

Touch ID is more convenient on a laptop since your hands are already on the keyboard.

Makes sense, because we don't hold iPads with our hands. They just float in mid-air on their own in front of our faces.
Score: 64 Votes (Like | Disagree)

Mr. Boger said Touch ID is more convenient on a laptop since your hands are already on the keyboard.

Okay but TouchID requires you to consciously change your hand placement. The screen is right in-front of your face so FaceID would require no thought to unlock, it would be instant..

I wish Apple was honest about this stuff rather than coming up with BS excuses. Supply chain issues, lack of space with current FaceID hardware, etc..
Score: 60 Votes (Like | Disagree)

antiprotest
What's going on? Are their minds kind of broken for them to offer these explanations? Are my hands already on the keyboard, but my face is in another room? It would be easier to just say they don't want to do it for undisclosed reasons.
Score: 50 Votes (Like | Disagree)