Update: We've learned from Apple that the Communication Safety code found in the first iOS 15.2 beta is not a feature in that update and Apple does not plan to release the feature as it is described in the article.

Apple this summer announced new Child Safety Features that are designed to keep children safer online. One of those features, Communication Safety, appears to be included in the iOS 15.2 beta that was released today. This feature is distinct from the controversial CSAM initiative, which has been delayed. 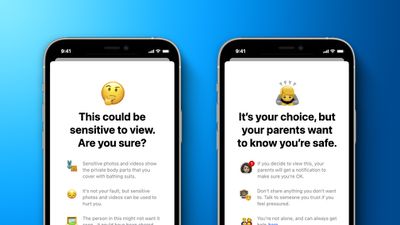 Based on code found in the iOS 15.2 beta by MacRumors contributor Steve Moser, Communication Safety is being introduced in the update. The code is there, but we have not been able to confirm that the feature is active because it requires sensitive photos to be sent to or from a device set up for a child.

As Apple explained earlier this year, Communication Safety is built into the Messages app on iPhone, iPad, and Mac. It will warn children and their parents when sexually explicit photos are received or sent from a child's device, with Apple using on-device machine learning to analyze image attachments.

If a sexually explicit photo is flagged, it is automatically blurred and the child is warned against viewing it. For kids under 13, if the child taps the photo and views it anyway, the child's parents will be alerted.

Code in iOS 15.2 features some of the wording that children will see.

There are specific phrases for both children under 13 and children over 13, as the feature has different behaviors for each age group. As mentioned above, if a child over 13 views a nude photo, their parents will not be notified, but if a child under 13 does so, parents will be alerted. All of these Communication Safety features must be enabled by parents and are available for Family Sharing groups.

Apple in August said that these Communication Safety features would be added in updates to iOS 15, iPadOS 15, and macOS Monterey later this year, and iMessage conversations remain end-to-end encrypted and are not readable by Apple.

Communication Safety was also announced alongside a new CSAM initiative that will see Apple scanning photos for Child Sexual Abuse Material. This has been highly controversial and heavily criticized, leading Apple to choose to "take additional time over the coming months" to make improvements before introducing the new functionality.

At the current time, there is no sign of CSAM wording in the iOS 15.2 beta, so Apple may first introduce Communication Safety before implementing the full suite of Child Safety Features.

tzm41
Hopefully no CSAM ever… The system is going to be exploited by some states one way or the other.
Score: 42 Votes (Like | Disagree)

Marbles1
“Sensitive photos and videos show the private body parts that you cover with bathing suits.”

Weird prudish Apple clearly have no idea about cultures outside the USA.
Score: 27 Votes (Like | Disagree)

840quadra
I am hoping that there are far more details and explanations of what Apple is doing on device, and in the cloud for this feature before it is activated or officially offered to consumers. I get what they are trying to do, but for some there is a huge creep factor attached to this type of service / feature.
Score: 22 Votes (Like | Disagree)

Wildkraut
Did Ned Flanders get a Job at Apple?
Score: 22 Votes (Like | Disagree)