Pixelmator 2.2 got its public release on Tuesday. The latest major update to the popular image editing app includes support for macOS Monterey and Shortcuts, as well as a new Split Comparison View, a new Bokeh effect, and more. 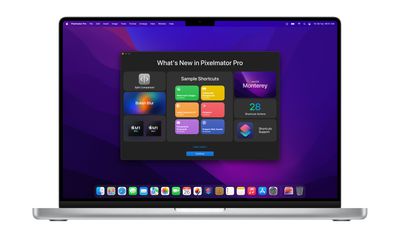 With Monterey bringing Shortcuts to the Mac for the first time, Pixelmator is adding 28 dedicated actions, including all ML-based tools (Super Resolution, Enhance, Denoise, Match Colors, and Crop) and some Shortcuts-exclusive features, like automatic background removal for photos of people. For more information, Pixelmator has provided a tutorial on using Shortcuts with the app.

This update also brings a new split-screen comparison view, allowing users to see all their edits more closely. Split comparison view can be turned on by Option-clicking the Show Original button or force clicking the canvas when using the Color Adjustments and Effects tools. Users can also press the Control + C keyboard shortcut or add the new compare button to the Pixelmator Pro toolbar by clicking View > Customize Toolbar.

In addition, there's an all-new Bokeh blur effect, while users can now open Pixelmator Photo files in Pixelmator Pro, and the maximum brush spacing has been increased from 100% to 1000%. Elsewhere, new FaceTime Portrait Masks mean whenever users insert photos of themselves with the ‌FaceTime‌ camera, they'll get an automatically created portrait mask applied to that layer. Some other more minor changes are listed in the full release notes.

Lastly, Pixelmator Pro's developers say users can expect features like ML Super Resolution to be up to 15 times faster on the latest MacBook Pro models when compared to the most recent Intel-powered Mac devices, thanks to Apple's new M1 Pro and M1 Max chips.

PsykX
At this point I don't really know why one would choose Photoshop over Pixelmator.

Of course it's a new app to learn, it's Mac-only, etc. but it's ridiculously fast, well crafted and so much fun to use.
Score: 8 Votes (Like | Disagree)

Kylo83
I wish we still had apples Aperture app back, we need a Lightroom alternative that uses the power of macOS
Score: 5 Votes (Like | Disagree)

FSMBP
One of top third party apps on my Mac (and it isn't an subscription, thank god)...Can't wait to use this new version on an M1 :)
Score: 5 Votes (Like | Disagree)

star-affinity
Really impressive app that feels (because it is?) truly macOS native.
Score: 3 Votes (Like | Disagree)

Nozuka
I love how fast they always are to adapt to new OS Updates and Hardware.
Score: 3 Votes (Like | Disagree)
Read All Comments

Thursday January 27, 2022 11:07 am PST by Juli Clover
The iPadOS 15.4 and macOS Monterey 12.3 betas that Apple released today introduce support for Universal Control, the long-awaited feature that's designed to allow multiple Macs and iPads to be controlled with a single mouse and keyboard. There are Universal Control settings available on both the Mac and the iPad, and the feature is enabled by default after updating to the new betas. On the...
Read Full Article • 50 comments

Monday June 7, 2021 11:42 am PDT by Mitchel Broussard
During its announcement of macOS Monterey today at WWDC, Apple also revealed that the Shortcuts app is coming to macOS this year. The company said that a large library of pre-built shortcuts will be made just for the Mac. Just like on iPhone and iPad devices, Shortcuts on Mac will let users quickly accomplish complex tasks with the apps they use the most. Apple said that power users will be...
Read Full Article • 55 comments