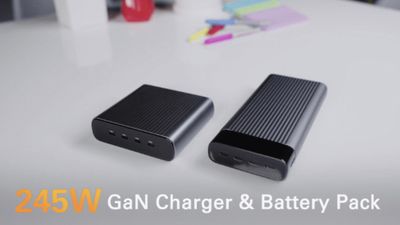 Hyper says that the 245W GaN Charger and Battery Pack are more powerful than four 61W chargers because at 245W, it's capable of charging up to four laptops at the same time.

The Battery Pack features four 100W USB-C ports and it can provide a maximum of 245W for various devices. So you can charge four 61W MacBook Pro models all at the same time, or do a 16-inch MacBook Pro, an iPad, an iPhone, and another accessory all at full charging speeds.

It's a 100Wh battery so though it provides up to 245W, it can still be brought on an airplane. The Battery Pack has enough juice to charge a MacBook Pro or MacBook Air up to two times with 27,000mAh capacity.

A built-in OLED display lets you know your battery status, providing real-time battery information like charging status, capacity, time to recharge, and the power being drawn from each port.

With the 245W GaN charger or any 100W USB-C PD charger, the battery pack can be charged up in as little as an hour.

Note: MacRumors is an affiliate partner with Indiegogo. When you click a link and make a purchase, we may receive a small payment, which helps us keep the site running.

triton100
Really surprised that macrumours is promoting a Kickstarter campaign like this. This company are notoriously bad. Check out the hundreds of disgruntled users with faulty products and no recourse. Shame on you macrumours.
Score: 9 Votes (Like | Disagree)

xmlninja
I backed 2 hyper campaigns before. The products came but not in time. This was in the beginning of the pandemic though to their defense. However as many other points out the products didnt live up to the expactions. It looks good on paper and in their video ads. They do what they can to make you believe this is something you need.

Proceed with caution. You have been warned.
Score: 3 Votes (Like | Disagree)

This might replace my plugbug duo for travelling. I don't really trust crowdfunded products though, they're usually scams

Hyper has been on the crowdfunding space for a while. They have mastered it. The soured me to crowdfunding when the sold their USB C high end hubs. The advertising was in my, and many others who commented, deceptive as to functionality. The devices were fault when shipped. You had no recourse because they would respond "this is not a purchase, it is backing a product" the crowdsourcing company would wash their hands. I do not plan to back any crowdsourcing. When the product is available via a reliable vendor such as Amazon, I will consider it. At least there is recourse.
Score: 3 Votes (Like | Disagree)

mannyvel
I've started using battery packs in the field because, well, you're in the field and there's no plug for miles around. Not these specific batteries obviously, but - they aren't just for airplane use.
Score: 3 Votes (Like | Disagree)

Cool that this exists though for someone.
Score: 3 Votes (Like | Disagree)

likegadgets
Except for their 100 GaN charger, other Hyper products (mainly their hubs) were faulty and the company unresponsive. I stay away from Hyper products though the "specs" on paper look nice. These are bulky items. I do not see them being useful for travel. But the specs for the AC adapter would work for a remote office I travel to, are interesting. I will wait and see what Anker comes up with for the new MBPs.
Score: 2 Votes (Like | Disagree)
Read All Comments

Thursday September 30, 2021 7:18 am PDT by Mitchel Broussard
Today we have a pair of charging-related deals from Hyper and Satechi, which are offering 20 percent off a portable battery and USB-C wall charger, respectively. Hyper's sale will end later today, while Satechi's will run for one week, through October 7. Note: MacRumors is an affiliate partner with some of these vendors. When you click a link and make a purchase, we may receive a small...
Read Full Article • 12 comments

Monday July 19, 2021 6:36 am PDT by Joe Rossignol
Apple's new MagSafe Battery Pack will begin arriving to customers around the world this week, and one lucky person has already snagged one. Steven Russell from Memphis, Tennessee said he managed to pick up the MagSafe Battery Pack from a local Apple Store over the weekend, and he has since shared photos on Reddit, providing a closer look at its design and thickness. Russell shared some...
Read Full Article • 196 comments

Monday March 29, 2021 8:00 am PDT by Sami Fathi
Hyper today officially launched the HyperJuice Magnetic Wireless Battery Pack for the iPhone 12 lineup, allowing customers to utilize MagSafe and wireless charging technology to power up their iPhones on the go. The battery pack only uses MagSafe to align itself magnetically to the iPhone 12 – it doesn't actually do the charging using MagSafe technology. Instead, it will charge the iPhone ...
Read Full Article • 57 comments

Tuesday February 23, 2021 7:49 am PST by Joe Rossignol
Following rumors that Apple is working on a MagSafe battery pack for iPhone 12 models, popular accessory maker Anker has beaten Apple to the punch with the release of its PowerCore Magnetic 5K Wireless Power Bank. First previewed at CES 2021, the PowerCore battery pack magnetically attaches to the back of any iPhone 12 model and provides 5W of wireless charging. With a 5,000 mAh capacity,...
Read Full Article • 64 comments

Tuesday July 20, 2021 11:14 am PDT by Juli Clover
The new MagSafe Battery Pack that Apple debuted this week is arriving to customers starting today and it's also now available for in-store pickup in many Apple retail locations around the world. We snagged one this morning and thought we'd take a look at it to let MacRumors readers know if it's worth the $99 asking price. Subscribe to the MacRumors YouTube channel for more videos. As the name ...
Read Full Article • 137 comments

Thursday September 30, 2021 10:22 am PDT by Mitchel Broussard
Yesterday we shared a new discount event happening at AT&T, where you can get 15 percent off select Apple accessories this fall. One notable accessory in the sale was the MagSafe Battery Pack, but it was out of stock. Today, however, that's changed, and you can now order the MagSafe Battery Pack for $84.15, down from $99.00. Note: MacRumors is an affiliate partner with some of these vendors....
Read Full Article • 19 comments