iPhone 13 Pro models feature an upgraded Ultra Wide camera with autofocus that enables macro photography, allowing users to take close-up photos of flowers, insects, and other objects that are as close as 2cm to the camera lens. 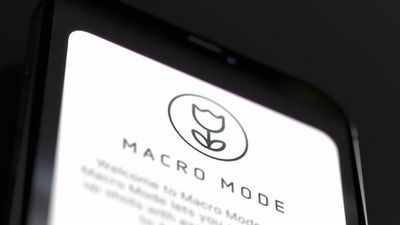 Apple's Macro Mode is limited to iPhone 13 Pro models, but those with older iPhones can now get in on the action, as Halide today announced that it has updated its popular third-party camera app with its own Macro Mode, with no accessories required. The feature is available on all iPhones with a Neural Engine, including the iPhone 8 and newer.

Halide said its Macro Mode first checks which one of your iPhone's camera lenses can focus the closest and switches to it. Then, the feature provides ultra-precise focus control down to the sub-millimeter to ensure the photo looks sharp. Finally, an AI-based feature called Neural Macro further enhances close-up details of the photo once shot.

Halide's sample photo shot with its Macro Mode on iPhone 12 Pro
If you already have an iPhone 13 Pro model, Halide said its Macro Mode essentially stacks on top of Apple's Macro Mode, resulting in "staggeringly close, microscope-like shots that are even more highly magnified."

To turn on Macro Mode in the Halide app, first tap the AF button to get into manual focus, and then tap the flower button. The feature is available as a free update for all existing users, with version 2.5 of the app rolling out on the App Store today. For new users, the Halide app is priced at $2.99 per month or $11.99 per year, or $49.99 as a one-time purchase.

Then buy the app for the one-time purchase option of $49.99. Developers need to make a living too!
Score: 32 Votes (Like | Disagree)

I'm so tired of developers trying to make money.
Score: 32 Votes (Like | Disagree)

diamornte
*****Requires subscription to use.
Score: 15 Votes (Like | Disagree)

Woodstockie
Was tempted, but not anymore. If you don't like subscriptions as they mention, you can also buy the app for $50. I completely understand that they want to make money, but that is a pretty steep price. Maybe worth it for some, but not for me.
Score: 14 Votes (Like | Disagree)

Nice. Makes a change from people taking pictures of their dinner. Or, IS it your dinner? ?
Score: 12 Votes (Like | Disagree)

Not trying to be rude but is this even a macro photo?
Score: 11 Votes (Like | Disagree)
Read All Comments