Apple CEO Tim Cook today reflected on Steve Jobs in a touching memo to employees that was obtained by Bloomberg's Mark Gurman. Jobs passed away 10 years ago today at the age of 56 following a lengthy battle with pancreatic cancer. 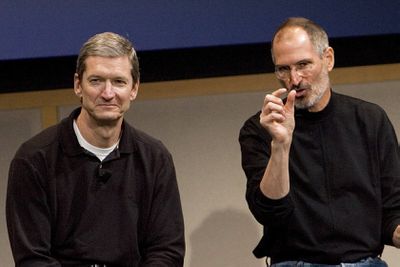 In the memo, Cook said that Jobs was a husband, a father, a friend, and a visionary who left an extraordinary legacy behind, adding that not a day goes by that he doesn't think about him. Apple's former design chief Jony Ive shared similarly heartfelt comments about Jobs this week, describing him as the most inquisitive human he has ever met.

Today marks the 10th anniversary of Steve's passing. It's a moment to celebrate his life and to reflect on the extraordinary legacy he left behind.

Steve believed that "people with passion can change the world for the better." That's the philosophy that inspired him to create Apple. And it lives in us today.

Steve was so many things: brilliant, funny, and wise, a husband, a father, a friend, and, of course, a visionary. He challenged us to see the world not for what it was, but for what it could be. And he helped so many people, myself included, see the same potential in ourselves. Not a day goes by that I don't think about him.

This year, as much as any other, we're reminded of the profound impact our products have on the world. I feel so lucky that we spend our days creating wildly innovative tools that connect people, inspire them to think differently, and empower them to make their own dent in the universe, too. It's one of the many gifts that Steve gave to all of us.

I wish Steve were here to see the way his spirit lives on in all of your amazing work. But most of all, I wish he could see what you do next. Steve once said that his proudest achievements were the ones that were yet to come. He spent every day imagining a future that no one else could see and working relentlessly to bring his vision to life.

Steve was a singular figure, but he taught us all how to soar. I miss him, and I will cherish him always.

Apple also commemorated Jobs with a full-page tribute on its website today, including a statement from his family.

TheYayAreaLiving ?
Today is a very sad day. We all miss you Steve! RIP!

_Spinn_
I often wonder how things would be different if Steve was still around.
Score: 19 Votes (Like | Disagree)

Darth Tulhu
It must've been terrifying to receive the news that you are now in charge of Steve Jobs's legacy.

Especially when the man was your friend.

You’re absolutely entitled to your opinion. But please save this type of commentary for a different post. This was just a man sharing a beautiful tribute to a friend that he loved dearly. Let’s keep things respectful and civil rather than lower the tone.

Lots of opportunities to discuss the merits of innovation in other threads.
Score: 11 Votes (Like | Disagree)

The absolute gall of Tim Cook is unreal. "Not a day goes by..." Are you ****ing serious?You singlehandedly turned a once great company into your own personal soapbox. As usualy with Timmy it's nothing but slogans and platitudes. This jackass should never have been made CEO.

He managed to turn his "personal soapbox" in to the most valuable company (12x more valuable than Jobs' Apple). I'd like to see any other CEO do that.
Score: 9 Votes (Like | Disagree)

Not a day goes by that I don't think about him.

Tuesday October 5, 2021 1:23 am PDT by Tim Hardwick
Apple today commemorated the tenth anniversary of Steve Jobs' passing with a special commemorative homepage on its website, including pictures and a link to a short film that captures some of his most memorable quotes and moments at Apple's helm. The homepage also includes a statement from the Jobs family, reproduced below: For a decade now, mourning and healing have gone together. Our...
Read Full Article • 115 comments

Thursday August 19, 2021 7:52 am PDT by Sami Fathi
An email from Steve Jobs surfaced as part of evidence of Apple's ongoing legal battle with Epic Games, has confirmed that in 2010, the company had internal plans of working on an "iPhone nano," a possible miniature version of the iPhone 4. The email, spotted in a trove of evidence by The Verge, was sent by late Apple CEO Steve Jobs to fellow executives in October of 2010, months after the...
Read Full Article • 88 comments

Friday September 23, 2022 9:40 am PDT by Sami Fathi
Customers who personalize their second-generation AirPods Pro charging case with an engraving will now have that engraving reflected directly on iOS as they pair and connect their AirPods Pro. Apple allows customers to personalize their AirPods Pro charging case with a special engraving that can include select emojis and Memojis. Unlike before, starting with the second-generation AirPods...
Read Full Article • 101 comments