iFixit has started one of its traditional full device teardowns on the new iPhone 13 Pro, giving us a complete look at all of the components that are inside. 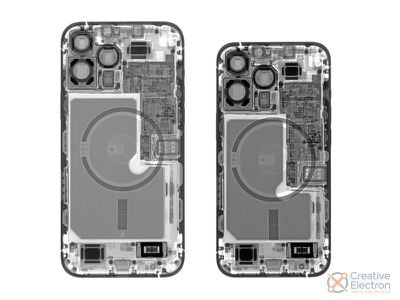 Prior to taking a look inside the new iPhone, iFixit did X-rays to show off the L-shaped battery, the MagSafe magnet ring, and stabilizing magnets for image sensors and logic boards.

This year's iPhone 13 Pro has an upper sensor cable near the top that's easy to rip during repairs, with iFixit calling it "scary thin." Visually, the Taptic Engine inside the device that controls Haptic Touch appears to be smaller, but it's actually bulkier than the similar component in the ‌iPhone 13 Pro‌, weighing in at 6.3 grams, up from 4.8.

Compared to the iPhone 12 Pro, the ‌iPhone 13 Pro‌ does away with the display-mounted speaker earpiece, a move that will make display replacements easier. iFixit suspects that Apple is using touch-integrated OLED panels that combine the touch and OLED layers of the display, cutting down on cost, thickness, and the number of cables to deal with.

The iPhone 13's flood illuminator and dot projector have merged into one module, which is part of the reason why Apple was able to cut down the size of the notch on this year's iPhones, and the Face ID hardware is now independent of the display. The earpiece speaker that was removed from the display has been relocated between the front-facing camera and the ‌Face ID‌ module.

According to iFixit, despite the decoupling of the ‌Face ID‌ module and the display, any display replacement disables ‌Face ID‌. This means that screen replacements not authorized by Apple will result in non-functional ‌Face ID‌ components.

There's 6GB SK Hynix LPDDR4X RAM inside, along with several Apple-designed power management and ultra-wide band chips, and as expected, the ‌iPhone 13 Pro‌ is equipped with Qualcomm's SDX60M modem and what iFixit believes is a Qualcomm DRR868 5G RF transceiver.

Apple analyst Ming-Chi Kuo said that the Qualcomm modem chip in this year's iPhones has satellite communication functionality, but if it's in there, iFixit didn't notice and as no satellite feature has been announced, it's a latent function if it exists. Bloomberg has clarified that Apple is working on a satellite feature that will let people send texts in emergency situations using a satellite connection, but this functionality isn't expected until 2022.

iFixit's full teardown has more detail on all of the components that are inside the device, and iFixit ultimately gave the ‌iPhone 13 Pro‌ a repairability score of 5 out of 10 due to the ‌Face ID‌ display replacement issue, the double glass, and the waterproofing methods that make some repairs more difficult.

Just stop buying dang iPhones then. Speak with your wallet, If something is inexcusable stop using the dang product.

All of a sudden Right to Repair becomes a lower priority when I tell people to just buy an Android.

I'm an iPhone user, accidents happen, yes, but I just get protection plans for my items, sure replacing items is an okay solution, but from what I've seen Dropping a phone and damaging the screen sometimes doesn't fix any underlying connection failures there are.

Also, Right to Repair should pass, then iPhone will not only be repairable but supported in software for longer than 6 months like android. (Sarcasm, more like a year and a half.)

Please drop the all-or-nothing thinking. This is a public forum. Using one’s voice to raise issues they are concerned about is a perfectly valid response. If you’re that bothered, then take your own medicine and stop reading public comments if they bother you.

JPack
The inability to replace the display by a third party is ridiculous. You can’t even salvage an OEM display from another iPhone. That’s environmentally friendly.

Too complicated to fix the Face ID unless
It’s by Apple.

6GB of Ram. I wish the Pro Max models had received 8GM of ram.

Why? Are you in need of 8GB of ram? Are you experiencing issues with 6? Would you even care if you didn't know how much it had?
Score: 16 Votes (Like | Disagree)

Apple still using LPDDR4 RAM. There was an expectation that they'd move to LPDDR5 this year since the flag ship phones of their rivals started using it last year.
Remember thought that the "rival" phones also come with (need) twice as much RAM (12G compared to the 6G in the 12/13). That's Android for you....

Why? Are you in need of 8GB of ram? Are you experiencing issues with 6? Would you even care if you didn't know how much it had?

I notice Safari keeps forgetting what was loaded on a tab and having to refresh the page. I consider that a RAM issue. Would something else fix it?
Score: 6 Votes (Like | Disagree)

I wonder why safari needs to run javascript to keep a PDF or JPG loaded.
Score: 6 Votes (Like | Disagree)
Read All Comments

iFixit Shares Live Teardown of the iPhone 13 and 13 Pro

Friday September 24, 2021 11:20 am PDT by Juli Clover
iFixit is gearing up for one of traditional teardowns of the new iPhone 13 models, but ahead of that full teardown, iFixit has done a live event to give us a first glimpse inside the refreshed devices. As we've seen in prior inside looks, the new iPhones have smaller, square-shaped Taptic Engines, and the iPhone 13 Pro has a smaller, denser logic board than the iPhone 13 along with an...
Read Full Article • 29 comments

Wednesday March 2, 2022 8:59 am PST by Sami Fathi
Apple and its service partners can now repair Face ID on an iPhone without replacing the entire device, allowing the company to offer cheaper and more environmentally sustainable means of device repairs to customers. As MacRumors reported last week, Apple Stores and authorized service providers would soon be receiving parts of the TrueDepth Camera system, including the front-facing camera...
Read Full Article • 17 comments