Next Emojis Will Include Melting Face, Biting Lip, Heart Hands, Troll, and More

The Unicode Consortium today released the list of new emojis that are coming in the Emoji 14 update, giving us a look at the new characters that we can expect to see introduced on Apple devices later this year. 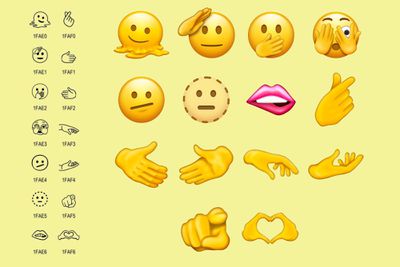 As outlined by Emojipedia, the finalized list includes 37 new emoji along with 75 skin tone additions for a total of 112 new characters.

Among the 838 new characters in #Unicode14 are 37 new #emoji, along with new emoji sequences, that are expected to show up on 📱s, 💻s, and other platforms sometime next year → https://t.co/deSr1g6m8k #絵文字 pic.twitter.com/xuTf8Os02K — The Unicode Consortium (@unicode) September 7, 2021

There are several new hand emojis, such as heart hands, rightwards hand, leftwards hand, palm down hand, palm up hand, hand with index finger and thumb crossed, index pointing at the viewer, along with an update to the handshake emoji.

Now that the emoji candidates are finalized and have been released, Apple is free to implement the new characters in a future iOS update. The images above are interpretations of what the emoji can look like, but Apple will design its own.

We can expect the new emoji characters to be introduced in an update to iOS 15 later this year. Apple last debuted new emoji with the iOS 14.5 update released in April.

rpmurray
Is there an "utterly disappointed" emoji? I'm preparing for the Apple event today.
Score: 2 Votes (Like | Disagree)

Analog Kid
Perfectly timed. Now everyone can complain about Apple being standards compliant on Unicode to distract from the new product announcements.
Score: 1 Votes (Like | Disagree)

Asarien
For all those triggered by a pregnant man emoji, understand it can also be used to represent having a "food baby" belly from eating too much.

And if you still think it's stupid, don't use it.
Score: 1 Votes (Like | Disagree)

Thursday January 26, 2023 5:09 pm PST by Juli Clover
The upcoming iPhone 15 models that are set to be introduced later in 2023 will adopt the Wi-Fi 6E standard, according to Apple analyst Ming-Chi Kuo. In a note about Apple's work on a Wi-Fi chip, Kuo said that the company will upgrade the iPhone 15 to Wi-Fi 6E. Apple is already using Wi-Fi 6E for the 11 and 12.9-inch iPad Pro models introduced last year, along with the new Mac mini and...
Read Full Article • 79 comments