Coinciding with the new Apple Watch Series 7 debut, Apple has unveiled some new watch faces that will be exclusive to the new model. 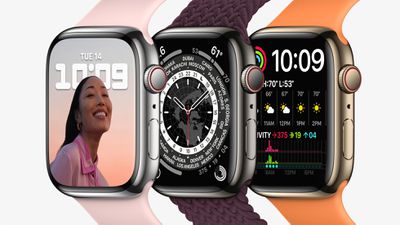 Amongst the new faces are Modular Max, Contour Face, and Nike Bounce, the latter of which is exclusive to the Series 7 Nike edition.

The Modular Max displays the digital time alongside a single complication, and includes longer complications that display across the screen below, which can show information like the day of the week, outside temperature, heart rate, activity, or quick access to an app.

The new Nike Bounce watch face dynamically animates with a tap of the screen, a scroll of the Digital Crown, or a move of the wrist. Apple says it pairs well with the refreshed Nike Sport Loop, which features the Nike Swoosh and logo text incorporated into the weave of the band. Meanwhile, the Hermes version has numbers that change hour by hour.

‌Apple says that the price of the Apple Watch Series 7‌ starts at $399 and the new model will be available later this fall. For more on the Series 7 model, check out Apple's original announcement.

davidako
Exclusive software features is even worse than no exclusive features at all.
Score: 20 Votes (Like | Disagree)

fel10
The bigger screen is nice and the new faces are cute, but worth the upgrade from a 6?

GadgetBen
Not worth an upgrade. Prosser probably gone into hiding, or should do.
Score: 13 Votes (Like | Disagree)

TheYayAreaLiving ?
More screen is always welcome. To me
It looks like a good upgrade.

TheYayAreaLiving ?
I wish Apple had announce when do they plan on releasing it instead of saying in the fall?
Score: 11 Votes (Like | Disagree)
Read All Comments