Apple has announced the creation of a process to properly identify and compensate individual creators involved in making DJ mixes that are streamed on Apple Music (via TechCrunch). 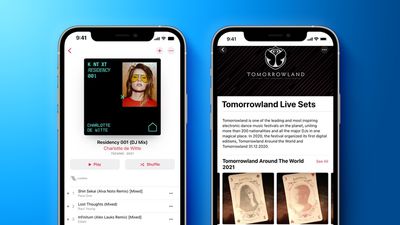 The process reportedly uses technology from Shazam, and Apple is working with major and independent labels to work out a system whereby streaming royalties are fairly divided among DJs, labels, and artists who feature in the mixes.

Since the rise of streaming services, the job of paying rights holders whose music is used in a DJ mix has been a lingering issue. The rise in popularity of the EDM genre has also resulted in an increasing number of remixes, mash-ups, and DJ mixes that incorporate samples from other songs, making working out who should be compensated even harder.

‌Apple Music‌ originally introduced DJ mixes and mash-ups in 2016 through a partnership with Dubset Media Holdings to identify and pay for licensed music within mixes. Now, Apple is using the Shazam technology it acquired in 2018 to identify and compensate everyone whose content appears in a mix.

"Apple Music is the first platform that offers continuous mixes where there's a fair fee involved for the artists whose tracks are included in the mixes and for the artist making those mixes," DJ Charlotte de Witte told TechCrunch on behalf of Apple. "It's a step in the right direction where everyone gets treated fairly. I'm beyond excited to have the chance to provide online mixes again."

As part of the rollout, Apple is showcasing the thousands of mixes already available on the service within its dedicated genre section for DJ mixes within the ‌Apple Music‌ app. Studio K7!'s DJ Kicks archive of mixes will also start rolling out on ‌Apple Music‌, giving users access to mixes that haven't been on the market in over 15 years.

The new technology will also let ‌Apple Music‌ subscribers see the names of individual tracks within a streamed mix, as well as give them the ability to skip or save the songs for listening offline.

It's not "dance music". If you have to leave out one of the three words from the acronym EDM, it definitely shouldn't be the word "electronic". If anything, it's "electronic music". The vast majority of all music genres is music intended to "dance" to.
Score: 8 Votes (Like | Disagree)

Dwalls90
If Apple was able to bring mixes to Apple Music while paying artists fairly, using a technology other competitors don't have access to, that would be cool and make me consider moving away from Spotify.
Score: 2 Votes (Like | Disagree)

Well no, you can dance to metal or shake your body etc, you dont call that dance music do you?
Score: 2 Votes (Like | Disagree)

As long as you're trying to play big picture, why pin the start of it at 1981?

pauloregan
I listen to DJ mixes all the time. I was at uni in the 90s. Apple need to improve the access to these. You have to goto browse, scroll all the way down to categories, find DJ Mixes and there you go. Everytime!

Surely there's room for a favourite category option etc.
The above would give more money out then.
Score: 2 Votes (Like | Disagree)
Read All Comments

Friday February 4, 2022 8:34 am PST by Joe Rossignol
Since launching in 2015, Apple Music has offered a three-month free trial to first-time subscribers, but the trial period has now been reduced. Starting this week, Apple Music offers a shorter one-month free trial to first-time subscribers in the United States, Canada, Australia, United Kingdom, Japan, and other countries. The change was first spotted by Japanese blog Mac Otakara. Apple...
Read Full Article • 147 comments