Apple today announced that it will be holding a special event on Tuesday, September 14 at 10:00 a.m. The event will take place at the Steve Jobs Theater on the Apple Park campus in Cupertino, California. 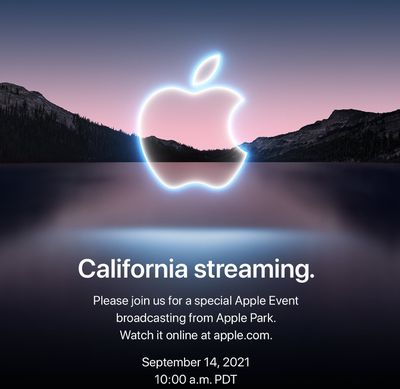 As with WWDC and last year's fall events, this new event will be held digitally with no members of the media invited to attend in person. Apple will likely provide pre-taped segments for each new product that's announced.

Last year's September event focused on the Apple Watch after the iPhone was delayed until October, but this year, things are back to normal. We're expecting Apple to announce new iPhone 13 models, the Apple Watch Series 7, and possibly the AirPods 3.

Subscribe to the MacRumors YouTube channel for more videos.
New MacBook Pro models and new iPads are also on the horizon, but Apple is expected to hold multiple fall events this year so we're not likely to see everything come out in September.

The general design will be the same, but we are expecting a smaller notch. There will also be some improvements to the cameras, with Apple bringing sensor-shift optical image stabilization to the whole ‌iPhone 13‌ lineup, introducing a better Ultra Wide camera for the Pro models, and improving the cameras of the ‌iPhone 13 Pro‌ to bring it in line with the Pro Max.

A faster A15 chip is coming, along with faster 5G technology, and perhaps the biggest change might be the 120Hz ProMotion display expected for the Pro models. There have also been rumors of an always-on display, so that's a possibility, as are larger batteries and more maximum storage space. We have details on all of the rumors that we've heard about the iPhone 13 in our roundup, so check that out to see exactly what to expect.

As for the Apple Watch Series 7, we're expecting the first redesign that we've seen in years. The new Apple Watch could have a flat-edged design that better matches the ‌iPhone‌ models, and it could be thinner with more available display space.

A rendering of the ‌Apple Watch Series 7‌ from 91Mobiles
A new lamination technique will bring the display closer to the front cover, and casing sizes are expected increase to 41mm and 45mm, up from 40mm and 44mm. A faster S7 chip is expected, and there could be a bigger battery, but there are no new health sensors coming this year.

Apple's manufacturing partners are reportedly having production difficulties with the new watch, so we could see a bit of a delay in availability or very tight supplies at launch.

The third-generation AirPods that are in the works are expected to have a design that's closer to the AirPods Pro, and silicone tips are a possibility.

The new AirPods will have shorter AirPods Pro-like stems, but will continue to be a more affordable option without Active Noise Cancellation.

Apple plans to stream the fall event live on its website, on YouTube, and on the Apple TV through the ‌Apple TV‌ app. Apple today made the YouTube livestream available ahead of the event date.


For those unable to watch, MacRumors will be providing full event coverage both on MacRumors.com and the MacRumorsLive Twitter account.
Tags: Apple Event Guide, September 2021 Apple Event
[ 257 comments ]

DHagan4755
Ok, commence the interpretation of what the design on the invite means...
Score: 27 Votes (Like | Disagree)

kerr
I think this is the year I upgrade from my Apple Newton
Score: 23 Votes (Like | Disagree)

Danger is my middle name

At least it isn't your last name.
Score: 20 Votes (Like | Disagree)

Serban55
Yeah baby, YEAH
We all be here in 7 days and 1 hour
Score: 20 Votes (Like | Disagree)
Read All Comments