Smartphone makers like Apple and Google should be required to provide security updates and spare parts for their mobile devices for at least seven years, according to new environmental responsibility proposals from the German government to the European Union (via Heise Online). 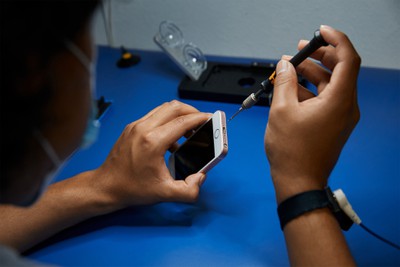 The European Commission recently proposed that mobile device manufacturers should provide software updates and spare parts for five years, with tablet spare parts available for six years. It also wants to force manufacturers to publish the prices of the spare parts and ensure they don't increase, and deliver said parts in no more than five working days.

However, Germany wants the EU to go further by demanding seven years of updates and spare parts availability. In addition, it wants manufacturers to offer spare parts at "a reasonable price," and faster delivery of spare parts, a point it wishes to discuss further with the Commission.

The German government also supports the European Commission's push to introduce ecodesign rules, including an energy label and a repairability index for smartphones and tablets. The production of the equipment accounts for the majority of greenhouse gas emissions, according to the EC, and only part of the raw materials can be recovered during recycling.

The DigitalEurope Industry Association, representing manufacturers including Apple, Samsung, and Huawei, believe the Commission's proposals go too far, and have suggested that makers provide security updates for three years and OS updates for two years.

The association also believes that it should only be required to offer replacement batteries and displays to consumers, since these parts have the highest failure rate. In contrast, components like camera sensors, microphones, and connectors "rarely fail," and therefore should not come under the mandate.

Following additional negotiations between all parties involved, the European Union plans to introduce the proposals by 2023.

Apple has often been criticized for disproportionate repair prices, such as the $79 fee to service the $99 HomePod mini, as well as arbitrary limits on repairs, such as barring repair of the iPhone 12's camera without access to Apple's proprietary cloud-linked System Configuration app.

The European Parliament last year voted to support the recommendations of the EU Committee on the "Right to Repair," including a system of mandatory labelling on consumer electronics to provide explicit information on the repairability and lifespan of products.

Kebabselector
Never really understood the hatred of laws that look after the consumer interests. I guess I fail at capitalism greed 101.
Score: 108 Votes (Like | Disagree)

I suppose they are free to avoid selling on the European market.
Score: 101 Votes (Like | Disagree)

Yes, and we’re free to criticize the EU.

You realize that this proposal is in your interest, do you? If you are a consumer, that is.

And it's in the interest of generations to come for whom we'd like to leave a habitable planet.

Forcing manufacturers to make devices that last longer and are better repairable is a good thing.
Score: 87 Votes (Like | Disagree)

Moonjumper
Apple are the only phone manufacturer I know of that provide software updates for 5 years.

I hope they ask the same of smart TVs. They are even worse than Android phones for updates.
Score: 74 Votes (Like | Disagree)

So you are angry that the EU could force a company to offer you spare part for your broken phone?

Yeah, because the US never dictates its rules to the rest of the world.... ?
Score: 63 Votes (Like | Disagree)
Read All Comments

Friday August 13, 2021 5:04 am PDT by Hartley Charlton
Apple may be forced to remove the Lightning port from the iPhone in favor of USB-C, according to legislation expected be presented by the European Commission next month, Reuters reports. The legislation would establish a common charging port for all mobile phones and other relevant devices in all European Union countries. The move is expected to primarily affect Apple, since many popular...
Read Full Article • 297 comments

Friday August 27, 2021 3:01 pm PDT by Juli Clover
Apple today announced the launch of a new service program that addresses an issue that can cause some iPhone 12 and 12 Pro devices to experience sound issues. According to Apple, a "very small percentage" of iPhone 12 and 12 Pro models may experience sound problems because of a component that can fail on the receiver module. Affected devices were manufactured between October 2020 and April...
Read Full Article • 107 comments