On Tuesday, Nikkei Asia published a report claiming the upcoming Apple Watch Series 7 will feature blood pressure measurement capabilities, and that this is one of the reasons why production of the device has hit snags as manufacturers adjust to the more complex design. 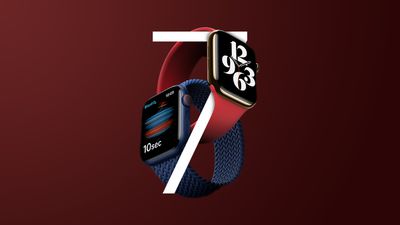 Later the same day, Bloomberg cited its own sources corroborating Nikkei's main claim that the new model had brought manufacturing challenges which could lead to supply constraints or shipment delays, but the subsequent report by Debbie Wu and Mark Gurman made no mention of Nikkei's claim about a blood pressure sensor being one of the causes of the production snags.

However, if there was any doubt, Gurman has now put to bed Nikkei's key assertion in a tweet, saying that there's "no chance" the Apple Watch Series 7 will have a blood pressure sensor.

Rockley's disclosure that its biggest client is Apple came about as the company prepared to go public in New York. Given the growth of Rockley Photonics and the scale of Apple's partnership with the company, it seems to be virtually inevitable that the company's health sensor technology will be coming to the Apple Watch at some stage, just not this year.

Apple is widely rumored to be planning an all-digital event for the middle of this month, where the company is expected to announce the iPhone 13 and Apple Watch Series 7, the latter of which is expected to have a new flat-edged design, larger case sizes, a faster processor, and battery improvements. For all the details, check out our Apple Watch rumor roundup.

Winstonp
If you've ever had your blood pressure or blood glucose tested in a health care setting, I simply cannot imagine a 1oz plastic and aluminum watch being able to replicate these measurements and produce anything remotely accurate. Don't get me wrong, Apple has tons of money and intelligent engineers, but we need to have reasonable expectations in 2021.
Score: 14 Votes (Like | Disagree)

I think we all knew there would be no blood pressure monitoring or blood glucose monitoring this year. The main upgrade seems to be the re-design.

Yep even if the sensor was ready (likely wasn't), Apple likes to hold back features so there is something new the following series. They do it with all the products. For example, mini LED being on the 12.9 iPad only but coming to 11 the following year (likely). It is smart business.
Score: 7 Votes (Like | Disagree)

Shanghaichica
I think we all knew there would be no blood pressure monitoring or blood glucose monitoring this year. The main upgrade seems to be the re-design.
Score: 6 Votes (Like | Disagree)

Apple Knowledge Navigator
There is the danger as Apple Watch becomes increasingly more popular, the level of anticipation rises to unjustified levels. I don't think it's unfair to say that, like the iPhone, some need to keep their expectations in check.

It's not Apple's job to guarantee revolutionary new features every year, but simply to find ways to iterate - even if that means the said feature appears granular. Because at the end of the day, though those who complain may have owned their watch/iPhone for several years, there are also prospective customers who are going to look at the list of features and be bowled over by what the product offers.

Even today, I'm flabbergasted at just how much technology is stuffed into these tiny devices. And whether Apple releases blood pressure monitoring this year or in the future, it's better they get it right first time than to rush to market with a half-baked system.
Score: 5 Votes (Like | Disagree)

Yep even if the sensor was ready (likely wasn't), Apple likes to hold back features so there is something new the following series. They do it with all the products. For example, mini LED being on the 12.9 iPad only but coming to 11 the following year (likely). It is smart business.

It’s smart and makes me keep opening up my purse year after year lol
Score: 4 Votes (Like | Disagree)
Read All Comments