Rockley Photonics, an Apple supplier, has today unveiled an advanced digital sensor system that is likely to come to the Apple Watch to enable a wide range of new health tracking features. 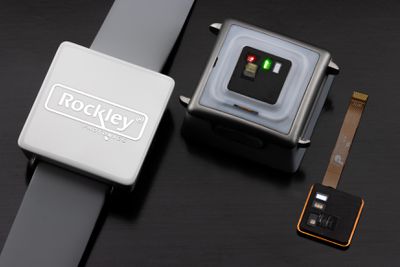 The technology uses a miniaturized chip solution with optical sensors that provide continuous, non-invasive monitoring of various biomarkers, in an attempt to overcome many of the challenges associated with wearable health monitoring and avoid the need for invasive sensors that must perforate the skin.

Many wearables use green LEDs to monitor heart rate, but Rockley's sensor uses infrared spectrophotometers that can detect and monitor a much wider range of biomarkers to dramatically increase the functionality of wearable devices. The sensor generates lasers to non-invasively probe beneath the skin to analyze blood, interstitial fluids, and layers of the dermis for specific constituents and physical phenomena.

Rockley is initially launching its full-stack sensing solution as a wristband that contains the sensor module and communicates with an app and it will be used in a number of human studies in the coming months, but the company suggested that its sensor module and associated reference designs, including hardware and application firmware, will be available for other consumer products.

Earlier this year, it was revealed that Apple is the largest customer of Rockley Photonics. The company's filings said that Apple accounted for the majority of its revenue over the last two years and that it has an ongoing "supply and development agreement" with the company, under which it expects to continue to heavily rely on Apple for most of its revenue.

Given the growth of Rockley Photonics and the scale of Apple's partnership with the company, it seems to be highly likely that the company's health sensor technology will be coming to the Apple Watch sooner rather than later, providing the technology lives up to expectations. Rockley has previously said that its sensors could be in consumer smartwatches and other electronics as soon as next year, which could align with the launch of Apple Watch Series 8 models.

ChaosHex
This is fantastic. As a diabetic, avoiding needles but still seeing my continuous blood sugar trends would be an absolute dream. FreestyleLibre costs upwards of $80 or more per unit, every two weeks… Ludicrous!
Score: 18 Votes (Like | Disagree)

rpmurray
Why hasn't Apple acquired the company yet?
Score: 12 Votes (Like | Disagree)

A pessimist is never disappointed.
Score: 10 Votes (Like | Disagree)

I was thinking of upgrading my Series 4 in September/October with the upcoming Series 7, but I'll probably hold off until Series 8 if this additional functionality will be present. Not sure about "...The sensor generates lasers to non-invasively probe beneath the skin..." though!

There is absolutely ZERO guarantee the Series 8 will have it. Not is there any the Series 9 will. I wouldn't bet on it.

I'm still upgrading my Series 4 this year to the 7. If the 8 is really that groundbreaking then it'll be worth the upgrade cost from the 7 (and the 7 should still have a decent trade-in price to make up much of the difference).
Score: 8 Votes (Like | Disagree)

SurferPup
I can't wait for the  Watch that monitors my blood alcohol content and Siri advises, "Warning, SurferPup you are about to pass out and by the way: your pants are still down."

orbital~debris
I am so here for the WATCH Infrared Spectrophotometer Edition!
Score: 7 Votes (Like | Disagree)
Read All Comments