Apple in just a few weeks is expected to release the Apple Watch Series 7 alongside new iPhone 13 models, and it's looking like this could be one of the most exciting design updates we've had to the Apple Watch in a few years.

Subscribe to the MacRumors YouTube channel for more videos.
We're not expecting new health features this year, and if there are new health sensors, Apple has kept them under wraps, but multiple rumors have indicated that the Apple Watch Series 7 is getting a new design.

The upcoming Apple Watch could feature a flat-edged design that's similar to the design of the iPhone 12 and the iPad Pro. Leaked renders said to be based on CAD drawings have depicted iPhone-12 style flat curves, a thinner Digital Crown, and new speaker design on the left side of the watch. 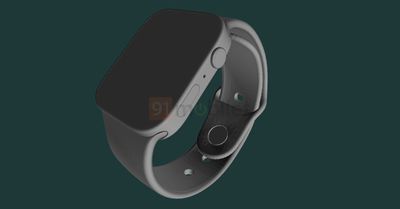 Apple Watch Series 7 render from 91Mobiles
Bloomberg says the Apple Watch will have thinner display bezels with the display using a new lamination technique that brings it closer to the front cover, and with this new casing and display technology, the upcoming models are expected to come in 41mm and 45mm sizes, just a bit larger than the current 40mm and 44mm size options.

The display of the 45mm model measures in at 1.8 inches according to rumors, up from the 1.73-inch display in the prior model. We don't yet know the size of the 41mm model, but it's likely to see a similar small size increase.

Rumors have been mixed on thickness. Bloomberg's Mark Gurman said that the Apple Watch could be a bit thicker overall, but not in a way that's noticeable to users, but leaked renders suggested it would be 1.7mm thinner, which is a decent thickness decrease. We'll have to wait to see on the exact casing dimensions.

Apple is rumored to be considering new color options for the Series 7 and it could come in a green aluminum shade. Last year, Apple introduced the Apple Watch Series 6 in blue aluminum.

Inside, the Apple Watch Series 7 will feature an upgraded S7 chip that could use double-sided technology to cut down on its size. The smaller S7 chip could leave more room for additional battery life and other components, and the new Apple Watch is expected to gain improved wireless connectivity and a better U1 Ultra Wideband chip.

As for new software, the Apple Watch Series 7 will run watchOS 8, which adds Focus mode, new Mindfulness features, Home and Wallet improvements, and more. Apple will also add new "Time to Run" and "Audio Meditation" features that will join the "Time to Walk" feature released earlier this year.

Based on past launch dates, the most likely date for the event that will see the unveiling of the Apple Watch Series 7 and the ‌iPhone 13‌ models is Tuesday, September 14, but the week after that is also a possibility. Either way, we don't have much longer to wait before Apple reveals the first of its fall device launch lineup.

WeatherWeasel
I am 74 and retired. AND I am capable of doing a lot with the electronics, unlike the humorous old fart geezer who knows nothing.
that being said, I use the watch 6 for health things mainly, the O2, the heart rate, stuff right now that is important to me. So the health apps are important to me. I won't upgrade until Apple says the new sensors are in place then it will be fine. I do wonder if even with the larger size of the case of the watch, will they do anything to improve the offering of those with thick wrists, like me, be able to purchase a cool band or will I have to exist with black plastic still. I tell yo Apple is missing a lot of sales not having that extra large band.

So Apple cosmetic and battery is fine. Not important to me as I am home and can charge the watch as needed and even if I was working, I can charge it when I would get home. Come out with nifty sensors and perhaps like non invasive blood glucose, you will have me buying one. This time, I will just let the software update where it will.
Score: 12 Votes (Like | Disagree)

now i see it
I'm still waiting for a G-Shock version
Score: 9 Votes (Like | Disagree)

pdaholic
6 wasn’t much of an update to the 5, and nothing here makes me want to upgrade to the 7. Watch is starting to feel a bit stagnant ?
Score: 7 Votes (Like | Disagree)

deeddawg
Is "exciting design update" a code word for ugly?

I know, real thing might look better than third party renders, but I'm just not a fan of what I'm seeing. Each to their own I guess.
Score: 7 Votes (Like | Disagree)
Read All Comments