The upcoming 14-inch MacBook Pro is set to be more expensive than the current 13-inch MacBook Pro and both the 14 and 16-inch models will offer the same performance, according to the leaker known as "Dylandkt." 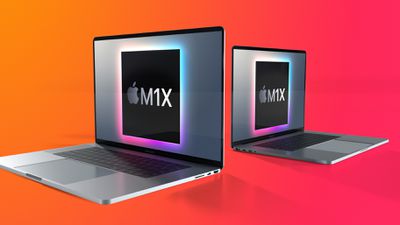 The leaker shared the information on Twitter, explaining that both of the upcoming MacBook Pro models, expected to come in 14 and 16-inch sizes, will feature the same performance due to having the same "M1X" chip.

Currently, the 16-inch MacBook Pro offers a significant performance improvement over the high-end 13-inch models due to its more powerful Intel chips and better thermals, so bringing the two model sizes to parity could be a major boost for owners of the smaller, more portable model.

‌Dylandkt‌ also told MacRumors that the 14-inch MacBook Pro will be priced around the current high-end 13-inch model, which it is expected to replace in the lineup, but will be priced much more closely to the 16-inch model due to their similar feature sets and performance.

‌Dylandkt‌ has correctly predicted details about a number of Apple's product launches. As early as November 2020, Dylandkt claimed that the next-generation iPad Pro would feature an ‌‌M1‌‌ chip. This was five months before the device emerged. Before the launch of the 24-inch ‌iMac‌ earlier this year, ‌Dylandkt‌ correctly predicted that the new, redesigned ‌‌iMac‌‌ would replace the smaller entry-level ‌‌iMac‌‌ only and feature an ‌‌M1‌‌ chip rather than an M1X.

The new MacBook Pro models are expected to debut around October, offering new designs, brighter panels with higher contrast, an improved webcam, function keys with no Touch Bar, more ports, and a MagSafe connector for charging. For more on what to expect, be sure to check out our dedicated MacBook Pro rumor guide.

The Clark
Well if this is true, then they better have a base storage of 512GB and 16GB of RAM.
Score: 66 Votes (Like | Disagree)

K-pax
Wth Apple?? I’m done with this rip off company.. price hike for what? Using their own chips and removing the Touch Bar and still jacking up the price??
Score: 56 Votes (Like | Disagree)

contacos
I am so annoyed with Tim Cook always keeping „last years model“ to justify price increases on updated versions. Steve Jobs didn’t do it. He wanted his users to actually experience to best they can offer and didn’t settle with „last years models“. However, from a business perspective it’s smart of course but jeeze, I don’t even want to think of the Euro prices.
Score: 56 Votes (Like | Disagree)

mymacrumorsname
Who would have thought they would raise the prices ?.
Score: 49 Votes (Like | Disagree)

peneaux
Expect to come with measly 8GB. Hopefully nobody buys them and send Apple a message.

dantracht
My wallet, bank accounts, and I all had a conference over zoom and we decided to skip this one since we love our M1 MBA and Mini.

We would have had the conference over sharetime or whatever that's called but it's not ready yet.

To those who upgrade, enjoy!
Score: 38 Votes (Like | Disagree)
Read All Comments

Friday October 22, 2021 7:36 am PDT by Mitchel Broussard
Amazon has introduced its first ever discount on the all-new 14-inch MacBook Pro. You can get the 8-Core M1 Pro 512GB model for $1,949.99, down from $1,999.00. This $50 sale is the first time we're tracking a deal on the 14-inch MacBook Pro on Amazon, and the second overall deal following offers from Expercom. Note: MacRumors is an affiliate partner with Amazon. When you click a link and make...
Read Full Article • 45 comments