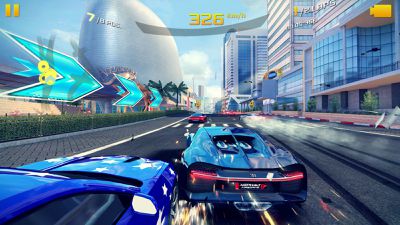 Originally released on the App Store in 2013, "Asphalt 8: Airborne" features more than 240 real cars to select from automakers and brands such as Ferrari, Ducati, Lamborghini, McLaren, Bugatti, Mercedes, Audi, Ford, and Chevrolet.

Interactions between the vehicles, environments, and over 50 high-speed tracks in "Asphalt 8" are a fully physics-based experience. Players can participate in limited-time events to earn rewards, and try their hand at over 400 career events, 1,500 car mastery challenges, six unique game modes, and additional single-player content.

"Baldo: The Guardian Owls" hails from Italian studio NAPS team. The original game will task players with completing puzzles, exploring, and battling in a hand-drawn open world, with both a main story and several side quests.

farewelwilliams
very good. i will try out arcade.

to others complaining about freemium games and microtransactions, this is your time to show developers like gameloft that we absolutely hate freemium games and we are 100% willing to pay for games that don't beg us for constant IAP. sign up and play asphalt to make their analytics show that there's a huge market out there for premium games on mobile.
Score: 7 Votes (Like | Disagree)

!!!
"Asphalt 8: Airborne" is not coming to Apple Arcade (that doesn't make sense, it's a free to play game). "Asphalt 8: Airborne+" is coming. I'm assuming the "plus" variant won't be filled to the brim with microtransactions.
Score: 6 Votes (Like | Disagree)

Is Baldo the hero or the princess though?
Score: 3 Votes (Like | Disagree)

Phil A.
I’ve just installed it and it really does appear to be the full Asphalt 8 without the p2w junk that they ruined it with in the past.

It’s always been a brilliant game that got ruined with the grift (particularly when they added loot boxes) and with that removed it’s just a brilliant game!
Score: 2 Votes (Like | Disagree)
Read All Comments