Bose appears to be near to releasing a successor to its popular QuietComfort 35 active noise-canceling headphones. Based on leaked photos and details obtained by WinFuture, the company's upcoming QuietComfort 45 headphones look set to retain the QC35's signature overall design, with some welcome changes that bring it up-to-date. 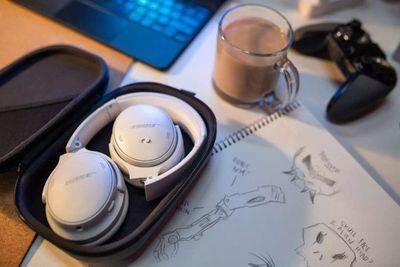 Launched in 2016, the QC35s (reviewed here) still come with a micro-USB port, and this is the most notable change in the QC45s, which sport USB-C. Meanwhile, the same physical buttons for controlling noise canceling, volume, and your voice assistant of choice are in evidence, and the headphones fold up in the same way.

Otherwise, the housing for the headband and cups make use of the same synthetic leather and glass-filled nylon to ensure the headphones remain "shockingly light" and durable, according to Bose. Expect similar pad comfort levels, too.

The QC45s feature an Aware Mode for allowing external sounds to be heard (think Transparency Mode in AirPods), the same TriPort acoustic architecture, and support for tuning audio to Bose's volume-adaptive Active EQ.

Battery life is said to be 24 hours of continuous playback – up from 20 hours in the QC35s – and the inclusion of USB-C brings with it a 15-minute Quick Charge capability that provides 2.5 hours of listening time. Multipoint pairing to two devices at the same time is supported, and the 3.5-millimeter jack is staying put for longer wired listening.

As for the quality of the active noise-canceling, WinFuture doesn't have any information, but expect Bose to go all out for the latest version of its flagship model, given competing headphones like Sony's WH-1000MX4 offer equal if not better noise cancelation than the QC35s.

The QuietComfort 45 headphones are expected to be officially announced soon with a retail price of $329.

Codestud
I have the 35s and although they were expensive, overall they have been worth it. The only downer is that it's a little bit tricky to replace the ear pads because they wear out, and I've had to do it several times now.
Score: 5 Votes (Like | Disagree)

hellosil
USB-C and a proper case are the only things to me that other headphones have over AirPods Max.

Synthetic leather is a sweater, I'm so glad Apple choose for a different material for the cups.
Score: 5 Votes (Like | Disagree)

Mackan
Wonder if they will have a good set of codecs.
Score: 3 Votes (Like | Disagree)

I love my QC35s but they are in a dire need of a refresh. Quality product but seriously dated look.
I wasn't crazy about the 700 looks but at least it is more modern.
Sony needs to do the same with the xm4 successor.

I have the first gen QC35. I can't say that I have really thought that these look outdated. I mean I wear them on my head and only time I really see them briefly is when putting them on/taking off. But I guess they could maybe make the headband slimmer or make it in a mesh material á la AirPods Max. But then again I'm no designer so what do I know. ? Do you have any suggestions how to make them more modern?
Score: 3 Votes (Like | Disagree)

Sydnxt
Buying these day 1, upgraded to the NCH700 and didn't find them as comfy.
Score: 3 Votes (Like | Disagree)

leman
Ugh, I have a pair of QC35 II that have been a mild disappointment. Using them with multiple devices is a terrible experience, I have to constantly unpair/pair when I switch from the iPad to the Mac. And now the ear pads are disintegrating after just two years. I am almost tempted to get the AirPods Max, just because of the user experience, if only they weren't so crazily overpriced.
Score: 3 Votes (Like | Disagree)
Read All Comments

Thursday September 23, 2021 2:23 pm PDT by Juli Clover
A bug in iOS 15 is preventing some AirPods Pro owners from using Siri to control the Active Noise Cancellation and Transparency features, but it appears to be fixed in the iOS 15.1 beta. As outlined on Reddit, some users who ask Siri to turn off Active Noise Cancellation or activate Transparency Mode on AirPods Pro connected to an iPhone running iOS 15 receive a "Sorry, I can't do that"...
Read Full Article • 63 comments

Monday September 27, 2021 10:00 am PDT by Joe Rossignol
Apple has unveiled limited edition Beats Studio3 headphones in partnership with A-COLD-WALL, a fashion brand by British designer Samuel Ross. The wireless headphones will be available in a slate color with a "speckled cement" finish that covers both the headphones and ear cushions. There's an ACW logo on the outside of the headband, while the inside of the headband has a clay color with more ...
Read Full Article • 46 comments

Thursday October 28, 2021 12:50 am PDT by Tim Hardwick
Apple has published a new support document detailing the use of high-impedance headphones with the new MacBook Pro models. As Apple mentioned when it unveiled the latest MacBook Pros, the 3.5mm headphone jack offers support for high-impedance headphones, which is good news for professionals who want to use the MacBook Pro with studio quality headphones. As noted in the support document,...
Read Full Article • 73 comments

Monday October 18, 2021 6:12 pm PDT by Juli Clover
Apple's new MacBook Pro models are equipped with the "best audio system in a notebook," according to Apple, with upgrades to the headphone jack and the speaker system. The 3.5mm headphone jack now offers support for high-impedance headphones. High-end headphone options that are high-impedance models from companies like Sennheiser and Beyerdynamic will offer better sound quality on the...
Read Full Article • 69 comments

Wednesday December 8, 2021 6:00 am PST by Juli Clover
Satechi today announced the launch of several new products, including a Thunderbolt 4 Dock, a USB-C Multiport MX Adapter, and a USB-C Multimedia Adapter M1, all of which have been designed with Apple silicon Macs in mind. According to Satechi, the $300 Thunderbolt 4 Dock was created for M1 Max MacBook Pro owners, offering up 11 ports that can be used through a single connection. There are...
Read Full Article • 65 comments