Parallels Desktop 17 was released today, bringing native support for Windows 11 and macOS Monterey to both Intel and Apple silicon Macs, as well as a range of performance and compatibility improvements. 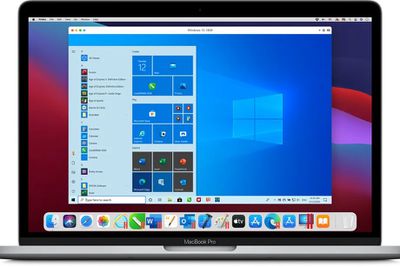 It's worth noting from the off that the versions of Windows that Parallels 17 can run on an M1 Mac are currently limited to the Insider Previews for Windows 10 and Windows 11, due to their compatibility with ARM-based hardware. However, Parallels has promised that when Windows 11 is officially released to the public, the virtualization software will be able to run it.

With that caveat, for both ‌M1‌ and Intel systems, Parallels 17 resumes Windows and Linux up to 38% faster compared to the previous version, and benefits from a sixfold increase in OpenGL graphics processing and up to a 25% improvement in 2D graphics performance, according to the company.

If you're running it on an Apple silicon machine, expect 33% faster Windows startup times, up to 20% better disk performance on Windows 10 Insider Preview, and up to 28% faster DirectX 11 performance.

Elsewhere, Parallels has improved its Coherence mode, which lets you run a windows app without launching the full virtual machine. Coherence will now window shutdowns, updates, and sign-in screens, while drag-and-drop between Windows and Mac apps has been enhanced, with support for dragging text and images between windows, including support for Quick Notes in Monterey.

‌M1‌ users can also now use BitLocker and Secure Boot thanks to a virtualized TPM (Trusted Platform Module) chip. Windows 10 will also recognize macOS battery status and turn on battery saving mode when your Mac runs low on battery.

jgbr
This having to buy a new version or upgrade every year is getting ridiculous.
Score: 33 Votes (Like | Disagree)

TheYayAreaLiving ?
Ahhh not a big fan of Subscription licenses which start at $79.99.
Score: 18 Votes (Like | Disagree)

orbital~debris
It seems pretty fitting that some software which lets you run Windows on your Mac has such an unrefined icon/icon badge.
Score: 14 Votes (Like | Disagree)

Smooch
I feel virtualization of Windows on a Mac is becoming more and more an old fashioned niche.

If you really need to run Windows and are willing to pay for a hefty subscription, maybe Windows 365 ('https://www.microsoft.com/en-us/windows-365') is an easier option?
Score: 14 Votes (Like | Disagree)

daabido
You can still buy a perpetual license, at least in Australia. Your mileage or kilometreage might vary.
Score: 10 Votes (Like | Disagree)

I feel virtualization of Windows on a Mac is becoming more and more an old fashioned niche.

That's true but for some software it's needed. I'm using for example CalMan and Colorspace to calibrate displays and TV's and they only run in Windows sadly.
Score: 9 Votes (Like | Disagree)
Read All Comments

Thursday September 9, 2021 7:51 am PDT by Joe Rossignol
VMware Fusion is now available as a private tech preview for M1 Macs, with users able to request access through an online form. A public tech preview will follow in around two weeks, according to a tweet from VMware Fusion manager Michael Roy. VMware Fusion for M1 Macs will be quite limited in scope, with a focus on virtualizing Arm-based Linux distributions. VMware Fusion will not...
Read Full Article • 172 comments