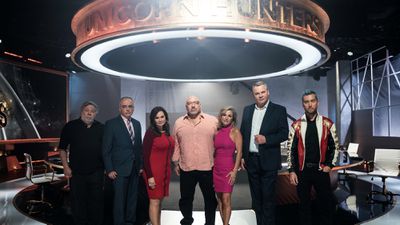 The show aims to find "unicorn" companies, which are startups able to reach a $1 billion valuation. A panel of investors called the "Circle of Money" serve as judges on the show, in a format that's similar to "Shark Tank." Circle of Money members include Steve Wozniak, Lance Bass, Moe Vela, Silvina Moschini, Alex Konanykhin, Scott Livingston, and Rosa Rios.

Unicorn is the name given to startup companies with a valuation of over one billion dollars. If you spot one and invest in it at an early stage, you could potentially earn enormous returns on your investment.

No one has the ability to predict which companies will ultimately become Unicorns, but Unicorn Hunters offers you a front-row seat to hear the pitch from businesses that have what it takes to become one.

With Unicorn Hunters, you "discover" private startups at the same time as our Panel of Experts, and you get an equal shot at investing in these very promising companies before they go big.

The Circle of Money can opt to invest in a show, but there is also a crowd funding component as audience members can opt in to be "hunters" to invest in private startups at the same time as the experts.

Four episodes of the first season of "Unicorn Hunters" with Steve Wozniak were filmed earlier this year and debuted online, but the show's producers and its stars want to transition from online to television and are seeking distribution both in the United States and internationally.

There is no word on which television companies might be interested in the show at the current time. Companies on the show so far include Far UV Technologies, fitness company Forte, Starton Therapeutics, Introimmune Therapeutics, and Carbon Connect. The initial episodes can be watched on the Unicorn Hunters website.

urbanslaughter1997
This sounds terrible. But maybe it's just me.
Score: 26 Votes (Like | Disagree)

ThomasJL
I love seeing Woz in the spotlight getting the recognition he so richly deserves. He single-handedly invented the personal computer as we know it. He deserves, at the bare minimum, just as much recognition as Steve Jobs.
Score: 18 Votes (Like | Disagree)

Popple
lol what? This is so random. An infinite number of monkeys given an infinite amount of time may be able to write Shakespeare ('https://en.wikipedia.org/wiki/Infinite_monkey_theorem') but I don't think they'd ever come up with a sentence like:

'Unicorn Hunters ('https://unicornhunters.com'),' a YouTube and Facebook show starring Apple-cofounder Steve Wozniak and singer Lance Bass as judges, is aiming to make its way to television

Stopped after reading that, no thanks. Google and Facebook together?!?! I feel like my identity will get stolen just by watching the first 5 minutes. Hard pass.
Score: 15 Votes (Like | Disagree)

GMShadow
Fun reminder that Wozniak joined up with Gil Amelio and Ellen Hancock to form Acquicor, a blank check company.

It failed. Badly. Hundreds of millions were lost.

T Coma
so, a show with the premise of knowing which companies to invest in... essentially doesn’t have enough investors.
Score: 11 Votes (Like | Disagree)
Read All Comments

Thursday January 26, 2023 6:30 am PST by Tim Hardwick
The new Mac Pro coming later this year is expected to feature the same spacious modular design as the 2019 model, but with fresh concerns over its lack of upgradeability surfacing, some users are beginning to wonder what the transition away from Intel architecture actually means for Apple's most powerful Mac. The current Intel Mac Pro that Apple sells is popular with creative professionals...
Read Full Article • 499 comments