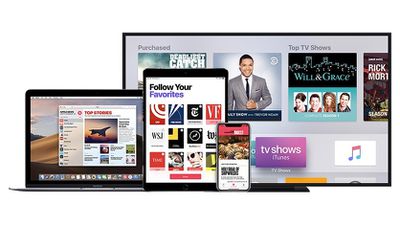 Services brought in $17.5 billion during the quarter, up 33 percent from $13.2 billion in the year-ago quarter and up from $16.9 billion last quarter.

During the earnings call announcing the results, Apple CFO Luca Maestri said that Apple's install base of devices hit a new all-time high as well, which helps drive services growth.

Apple now has more than 700 million paid subscriptions, which is up 150 million from last year, and is four times the number of subscriptions that Apple had four years ago.

BigMcGuire
My family and I are enjoying Apple One Premier. I don't see this changing anytime soon.

Collectively we use 400GB of storage. (394GB as of this writing).
We all use Apple News - some more than others.
My wife and I are heavy users of Apple Fitness - especially in summer months here in California.
While we don't use Apple Arcade, another family member does.
All heavy users of Apple TV and Music.

Now.... I do wish Apple would bring iCloud into the modern age. OneDrive and Google Drive make iCloud look prehistoric but as those who uses Apple devices, iCloud has been working really well for us.
Score: 3 Votes (Like | Disagree)

nutmac
Anyone know the rough percentage of service revenue that App Store purchases and subscriptions bring in?
Score: 1 Votes (Like | Disagree)

Just wait until people are no longer free AppleTV+

True! I just canceled mine right before renewal - that free year and a half was good for a start but not for the long haul. Same with Apple Fitness.
Score: 1 Votes (Like | Disagree)
Read All Comments