Users who subscribed to the Paramount+ and Showtime bundle via Apple TV channels are noticing that their subscription is being refunded and showing as "expired," likely indicating that the bundle is coming to an end. 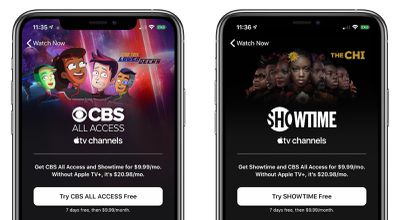 A large number of subscribers on Reddit, Twitter, and the MacRumors forums are reporting billing errors for the bundle, where the $9.99 per month fee has failed to renew. The subscriptions tab of affected accounts is reportedly showing the bundle as "expired."

Users flagging the issue seem to be receiving different responses from Apple support, with some being told that the billing error was a fixable mistake and others being told that the bundle was a limited offer for one year only. Most users still seem to be able to access the streaming services, but the billing rejections and "expired" phraseology appear to suggest that their subscription will not renew. Apple or ViacomCBS, the owner of Paramount+ and Showtime, has not given an official comment.

The offer originally launched on August 17 last year via the TV app, giving Apple TV+ subscribers access to both Paramount+, then titled CBS All Access, and Showtime, for $9.99 per month. The bundle aimed to encourage the use of ‌Apple TV+‌ and the ‌Apple TV‌ channels feature.

The loss of Paramount+ and Showtime would be yet another blow to ‌Apple TV‌ channels, which have largely failed to garner much support from streaming services. Last week, HBO dropped support for its Apple TV channel and encouraged subscribers to move to HBO Max instead.

Since the bundle launched a year ago next month, it is possible that it could have been an offer limited to one year only as some subscribers have suggested. If the bundle of Paramount+ and Showtime has indeed been discontinued, subscribers will now need to spend $9.99 for Paramount+ and $10.99 for Showtime per month. The combined cost of $20.98 would be over double the $9.99 cost of the exclusive bundle for ‌Apple TV+‌ subscribers.

jgreg728
And here I was thinking “welp at least we still got Paramount and Showtime holding up Apple TV channels” after the HBO fiasco last week. Man this isn’t good. Apple, MAKE BETTER DEALS FOR THIS SERVICE AND GET THESE CONTENT PROVIDERS BACK ON BOARD. Channels concept is so much better than separate apps but you don’t do anything to help support and maintain the service!!!!
Score: 5 Votes (Like | Disagree)

guinnessduck
I had been wondering what was going on, as I kept getting pop ups from Apple card notifying me about a 9.99 charge (on the day I usually get them letting me know the bundle renewed). When I'd check on the card there would be no charge shown, pending or otherwise. Then a few hours later I'd get the notification again. Happened 4 or 5 times. Once the 9.99 actually showed up in pending, but then a few minutes later it disappeared from being a pending charge.
Score: 3 Votes (Like | Disagree)

Strangely enough, mine says it expired on July 24th. There is an option to resubscribe, but when I press it and use Face ID to authenticate, nothing happens. The subscription still shows as expired. There is no problem with my payment method…

Same experience here. Sure would be nice if Apple let us know what the heck is going on. I just went into the TV app, clicked on the Paramount+ channel & there’s an option to subscribe for $9.99/month. I successfully resubscribed.
Score: 2 Votes (Like | Disagree)

JedWare
Mine Expired on Jul 24th. I do have Apple TV+ still and if I try to renew nothing happens. Is it too much to ask for Apple to email us when something like this cancelation is going to happen? I remember seeing no time limit on original offer so this promotion being only a year is news to me and I read all the fine print.
Score: 2 Votes (Like | Disagree)

contacos
You know what’s funny? The App shows me as a subscriber to the ad supported tire but I am not being charged, nor have I added my payment information anywhere and I can’t see it as an active subscription on iOS either. Also, I see no ads on Paramount+ ??‍♂️
Score: 2 Votes (Like | Disagree)

AgentOSX
I have the same cancel notice, “expired” as of yesterday… but I can still play content from Paramount+ and Showtime.

I have a renew subscription option as well, but as described above it doesn’t do anything when attempted.
Score: 2 Votes (Like | Disagree)
Read All Comments