Lawyers representing Apple have suggested that the company could exit the UK market if the terms of an ongoing patent dispute are "commercially unacceptable" (via This is Money). 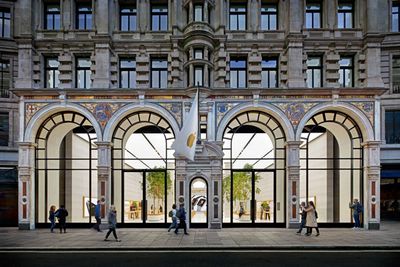 UK patent holder Optis Cellular Technology is suing Apple for patent infringement after it refused to pay license fees worth around $7 billion for using "standardized" smartphone technology in its devices.

Last month, a British High Court judge ruled that Apple had infringed two Optis patents relating to technology that enables devices to connect to cellular networks. Optis has also made a number of additional claims about patent infringements from Apple. Kathleen Fox Murphy, a lawyer representing Optis, commented that "everyone thinks about Apple as the market leader in smartphones, but Apple has to buy in most of the technology in an iPhone."

Apple now faces a trial in July 2022 over how much it should pay to Optis for patent infringements in the UK. Last year, the UK Supreme Court ruled that a UK court can set the rate Apple should pay for all of its patents worldwide, even though the court considers the infringement of UK patents only.

At a hearing earlier this year, Mr. Justice Meade hinted that Apple "might be disappointed" by the rate ultimately set by a judge that it will be expected to pay. Apple would be able to avoid the sanction if it exits the UK market, but Meade suggested that this was unlikely, saying "There is no evidence Apple is really going to say no [to paying the rate set by the judge], is there? There is no evidence it is even remotely possible Apple will leave the UK market?"

In spite of this, the response from Apple's legal representation firmly laid out that leaving the UK market may become an unavoidable option for the company if the terms set by the court are "commercially unacceptable." Marie Demetriou, Apple's lawyer, said:

I am not sure that is right... Apple's position is it should indeed be able to reflect on the terms and decide whether commercially it is right to accept them or to leave the UK market. There may be terms that are set by the court which are just commercially unacceptable.

The unprecedented threat highlights the possibility of Apple ending its sales in the UK, perhaps shuttering retail stores and curtailing services to existing customers. Nevertheless, it is highly unlikely that Apple would follow through with the threat, not least because the UK is one of the company's biggest and most important markets. The App Store alone supports more than 330,000 jobs in the UK.

There will be a separate court case later this month to determine if Apple should make a legally binding commitment to abide by the payout rate decided at the trial next year. Should Apple refuse to make undertakings to the court, it may also be banned from selling infringing devices, such as the ‌iPhone‌, in the UK.

The dispute appears to be getting surprisingly heated for what would ordinarily be a fairly common patent troll case where companies acquire broad, standard-based patents with the hope of extorting money from other companies. Global pressure to rein in powerful big tech companies may have also escalated hostilities. Indeed, in the UK, Apple is currently being investigated for multiple allegations of anti-competitive conduct.

markfc
I’d be tempted to leave the UK market too. ?
Score: 51 Votes (Like | Disagree)

krspkbl
this better not happen. i ****ing hate this country.

Not a good day for UK people ?⚽️

you do know that UK consists of 4 countries and 3 of them are happy after that football result, right?
Score: 45 Votes (Like | Disagree)

iLoveDeveloping
Hahaha Hilarious, is there nothing the UK hasn't ruined lately. Apple can gladly come to Ireland. I’d love to see some apple stores here.. ?
Score: 40 Votes (Like | Disagree)

MLVC
"How dare the ECJ have jurisdiction over anything British".

UK court: the UK Supreme Court ruled that a UK court can set the rate Apple should pay for all of its patents worldwide

Never a dull day with the British.
Score: 36 Votes (Like | Disagree)

MrJM
Let’s be honest, they will never leave the UK. It’s ridiculous to even suggest it.
Score: 28 Votes (Like | Disagree)
Read All Comments

Sunday January 23, 2022 2:59 am PST by Tim Hardwick
Apple has always emphasized the depth of thought that goes into the design of its products. In the foreword to Designed by Apple in California, a photo book released by the company in 2016, Jony Ive explains how the company strives "to define objects that appear effortless" and "so simple, coherent and inevitable that there could be no rational alternative." But every once in a while even...
Read Full Article • 329 comments

Sunday January 23, 2022 10:32 am PST by Juli Clover
Apple is working on a number of new products that are set to launch this fall, and Bloomberg's Mark Gurman says that it will be "the widest array" of new devices that Apple has introduced in its history. In his latest "Power On" newsletter, Gurman explains that Apple is working on four new iPhones (iPhone 14, iPhone 14 Max, iPhone 14 Pro, and iPhone 14 Max), an updated low-end MacBook Pro, a ...
Read Full Article • 185 comments