The ceramic Apple Watch Edition dated back to 2014, despite the high-end model not launching until 2016 with the Apple Watch Series 2, according to newly-shared images of a prototype casing. 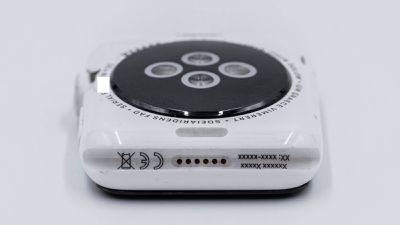 The images, shared on Twitter by the prototype collector known as "DongleBookPro," show a prototype white ceramic original Apple Watch casing that was manufactured in 2014. The device runs internal software for testing purposes and it was made long before the first release of watchOS, but it looks largely identical to the white ceramic Apple Watch Edition that launched in 2016.

The images of the 2014 prototype show that Apple had reached a far stage of development on the ceramic Apple Watch Edition, but for unclear reasons, the company elected to only offer the original Apple Watch Edition in 18-carat gold, and held back the ceramic casing to replace the gold version in the lineup when the Series 2 launched in 2016.

Apple marketed the ceramic white Apple Watch Edition as a high-end option starting at $1,249, owing to its extremely unique finish.

At the time, Apple lauded the ceramic casing as strong, light, and scratch-resistant, being four times as hard as the stainless steel finish, while also featuring a "pearly, lustrous finish" that is extremely resistant to scratches and tarnishing.

The process of creating the Apple Watch Edition case begins with a high-strength zirconia powder that's combined with alumina to achieve its rich, white color. Each case is then compression molded, sintered, and polished using a diamond slurry, which results in a remarkably smooth surface and an exquisite shine. With this precise level of workmanship, every Apple Watch Edition case takes days to make.

Some fans of the unique white finish hope to see a ceramic option for the upcoming Apple Watch Series 7, which is seemingly made more likely by the alternating availability of the model in recent years, but there is no word on whether such a casing will again become available with the launch of the Series 7 later this year.

caliguy
How long did they test Apple Card?

HiVolt
I've only ever bought the Sport Aluminum ones. The "Premium" ones aren't worth the price.
Score: 16 Votes (Like | Disagree)

ouimetnick
I’ve never understood the idea behind a $1200+ ceramic or $18,000+ gold Apple Watch. It’s not like these are classic time pieces. They are obsolete with in 8-9 years, and they will not retrofit new internals inside of the old enclosure. Unless you are trying to flaunt your wealth or are insanely rich, it seems like a poor way to spend money.
Score: 14 Votes (Like | Disagree)

calzon65
I love the Apple watch, especially for how much technology has been compressed into such a small space, but I don't think of luxury when I think of the Apple watch or any of the other similar watches (i.e., wrist computers). For luxury watches, I think of Rolex or Patek Philippe. Not because the exorbitant price, but for the intricate workings and finishes of those watches, which in some cases requires over 1,000 hours to create.
Score: 12 Votes (Like | Disagree)

The Safire used Apple Watch is not pure enough to be as scratch resistant as Safire in "real" watches.

Apple Watches are real, I can assure you. We have a whole forum dedicated to them here. I know it might seem like some crazy consoiracy theory, but they really do exist. Check your local Apple store, they will even sell you one.
Score: 9 Votes (Like | Disagree)

The images of the 2014 prototype show that Apple had reached a far stage of development on the ceramic Apple Watch Edition, but for unclear reasons, the company elected to only offer the original Apple Watch Edition in 18-carat gold, and held back the ceramic casing to replace the gold version in the lineup when the Series 2 launched in 2016.

I expect that reason can be explained with two words: Jony Ive.

I would not be surprised if he wanted the gold to be the only launch Edition model and a "cheap" (at a tenth the price) ceramic model would be seem as "devaluing the brand".
Score: 8 Votes (Like | Disagree)
Read All Comments