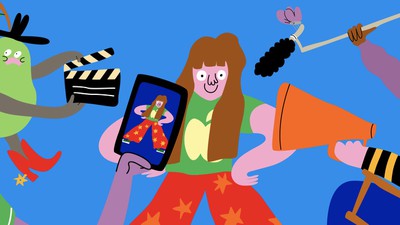 Apple Camp is open to children aged 8 to 12, but sessions are highly limited and generally only available in major cities like San Francisco, Los Angeles, and New York.

Right now, Apple is offering one session on the Clips app on iPad, which the company says will allow children to "make movie magic" with short videos. Signups are available on the Apple Camp section of the Today at Apple website.

Children who are not in an area where an Apple Camp session is being held can access a new at-home activity guide that's available to download. It offers a full calendar of activities like making a photo album of textures, creating a storybook starring toys, making a tourist map, making songs in GarageBand, and more.

giv-as-a-ciggy-kent
This artwork is truly terrifying. Utterly horrific. Man’s contempt of dignity and utter debasement distilled into a single image.

We should feel shame but that ability was brutalized out of us years ago. This is what we now deserve. This is the future we chose. This what we get for allowing degenerates to dictate culture.

Even if you're joking, I really do hate that style of art that it seems many companies are using nowadays. It's creepy and soulless. I don't understand the focus on deformed monster-humans versus just using some kind of relatable gender neutral portrayal instead.

The artwork style is typically referred to online as Globohomo Art (Global Homogenization). The reason the artwork is so polarising and distasteful is because it is indeed political in nature, and it’s focus is to blur the lines of gender and form in humans. It’s a mix-n-match of various human features, colours, genders, attributes that are blended enough to still be considered human but also to confuse the viewer into never establishing a baseline ‘normal’ for what a human should look like. It is considered by many to be a form of propaganda.

That little hand-nose is oddly terrifying.

Hastings101
Even if you're joking, I really do hate that style of art that it seems many companies are using nowadays. It's creepy and soulless. I don't understand the focus on deformed monster-humans versus just using some kind of relatable gender neutral portrayal instead.

This artwork is truly terrifying. Utterly horrific. Man’s contempt of dignity and utter debasement distilled into a single image.

We should feel shame but that ability was brutalized out of us years ago. This is what we now deserve. This is the future we chose. This what we get for allowing degenerates to dictate culture.

IllinoisCorn
This artwork is so creepy.
Score: 4 Votes (Like | Disagree)
Read All Comments

Wednesday July 14, 2021 6:24 am PDT by Joe Rossignol
Apple today announced that its free "Today at Apple" creative sessions are expanding to YouTube, as reported by CNET. The first session on YouTube was uploaded today and explores how to draw yourself as a "Peanuts" character in the Pages app using an iPad and Apple Pencil with the help of Apple TV+ series "The Snoopy Show" storyboard artist Krista Porter and Apple retail employee Anthony....
Read Full Article • 24 comments

Thursday June 24, 2021 7:02 am PDT by Joe Rossignol
Apple's retail chief Deirdre O'Brien recently spoke with CNBC's Josh Lipton about the future of Apple Stores amid a transition to a post-pandemic world. As noted by 9to5Mac's Michael Steeber, June 15 marked the first day that all Apple Store locations were open around the world, as public health restrictions begin to ease in many countries. O'Brien confirmed that all Apple Store locations...
Read Full Article • 37 comments

Monday June 28, 2021 5:15 pm PDT by Juli Clover
Apple has earned a total of 25 nominations for the 48th annual Daytime Emmy Awards for Apple TV+ television shows, Apple announced today. Apple received 19 Daytime Emmy Award nominations in the Children's & Lifestyle categories, along with six prior nominations in the craft categories. "Ghostwriter," "Stillwater," and "Long Way Up," are among the TV shows that have been nominated for awards, ...
Read Full Article • 47 comments

Friday April 16, 2021 4:37 am PDT by Tim Hardwick
Facebook is facing calls from an international coalition of children's health advocates to abandon its plans to build a version of Instagram for kids, reports The Guardian. The campaign follows news that broke in March which revealed that Facebook is developing a version of Instagram that's specifically aimed at children under 13. Instagram's current policy prohibits kids under 13 from using ...
Read Full Article • 60 comments

Wednesday July 21, 2021 1:49 am PDT by Tim Hardwick
Apple Music on Thursday will host a global livestream for the premiere of Kanye West's tenth studio album, titled "Donda." The sold-out event will take place at the Mercedes-Benz Stadium in Atlanta, Georgia, and Apple Music's livestream will start at 8:00 p.m. Eastern Time. The livestream was revealed in a Beats Studio Buds ad that aired during the NBA Finals. The ad features U.S. track...
Read Full Article • 95 comments

Wednesday May 19, 2021 1:08 pm PDT by Juli Clover
Apple today updated its Apple Store app on the iPad to introduce a refreshed design that includes a new sidebar. The sidebar on the left side of the screen offers quick access to shopping, Today at Apple sessions, favorites, order history, and more. There are also buttons to shop by product so you can navigate to the iPhone, Mac, iPad, Apple Watch, and other Apple device options more...
Read Full Article • 22 comments