Pixelmator Pro 2.1 Coral got its public release today. The latest major update to Pixelmator Pro adds a number of notable new features, including the ability to improve the composition of photos with machine learning, a new Quick Fill feature, improved painting tools, and more. 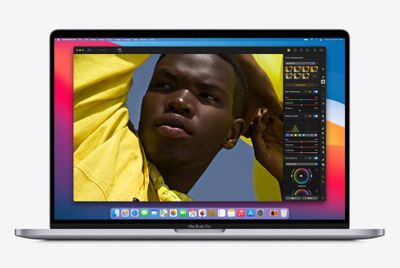 Powered by Core ML, the new ML Crop feature lets users automatically crop photos with a single click. According to the developers, the machine learning algorithm powering this feature has been trained to crop photos in a way that makes them more striking and eye-catching, making it a useful way to get a different perspective on cropping photos.

With ML Crop turned on, hovering over different aspects ratio presets will preview them with ML Crop's suggestions, which are generated by on-device processing to ensure high performance and privacy. In addition, the Crop tool has been redesigned to include perspective correction, crop overlays, and more.

Meanwhile, the new Quick Fill feature lets users change the look of objects in compositions via simple drag and drop. Just drag a color from the new color well in the Pixelmator Pro toolbar and drop it onto any object in your image to change its color. The Quick Fill feature works with every layer type in Pixelmator Pro, including images, shapes, and text layers.

Elsewhere, thanks to the new Stroke with Brush feature, users can now paint brush strokes along paths and around layers with ease. Customizing the look of a brush causes a live preview of its stroke to appear right on the canvas. Brush strokes can be painted around image, shape, and text layers, as well as along vector paths

A new text size slider also means there are now five different ways to change the size of text, while the update also brings advanced paragraph spacing options and the ability to adjust paragraph indents.

The update lands while Pixelmator Pro is still on sale for $19.99, offering customers 50% off the usual $39.99 price, although the sale ends on July 6th. Pixelmator Pro 2.1 Coral is a Universal app, so it runs natively on both ‌M1‌ and Intel-based Macs. Updates to the image editing app are free for existing users of Pixelmator Pro, which can be downloaded directly from the Mac App Store.

Amazing features. Apple should incorporate these into the stock photo app. The current editing functions are so crap that it's pathetic. There should at least be color fill functions, Content Aware (similar to Photoshop), and much more advanced editing options based on ML and the power of the Neural Engine built right into the default photos app. I shouldn't have to go to these third party apps just to edit pictures.

Not sure why it's Apple's responsibility, or why using a (very good) third-party app is an issue...
Score: 12 Votes (Like | Disagree)

Amazing features. Apple should incorporate these into the stock photo app. The current editing functions are so crap that it's pathetic. There should at least be color fill functions, Content Aware (similar to Photoshop), and much more advanced editing options based on ML and the power of the Neural Engine built right into the default photos app. I shouldn't have to go to these third party apps just to edit pictures.

What’s wrong with using a third party app? The point of an OS’s included app set isn’t to incorporate everything imaginable. It’s to provide some level of functionality, yes, but importantly to be a platform on which other developers can build apps.
Score: 8 Votes (Like | Disagree)

japanime
Pixelmator is a decent app, and it was part of my workflow for more than a decade.

But Affinity Photo, which I've been using as my main photo editor for the past two years, doesn't cost a whole lot more than Pixelmator yet runs circles around it.
Score: 6 Votes (Like | Disagree)

Bustycat
A third-party macOS app that is more Apple than Apple’s.
Score: 5 Votes (Like | Disagree)

PsykX
With apps as powerful as these, I don't know how Adobe gets away by making Photoshop still so expensive.

Just one month of renting Photoshop pays for being the owner of Pixelmator Pro forever.
Score: 3 Votes (Like | Disagree)

Pixelmator is a decent app, and it was part of my workflow for more than a decade.

But Affinity Photo, which I've been using as my main photo editor for the past two years, doesn't cost a whole lot more than Pixelmator yet runs circles around it.

I really wanted to like Pixelmator, but I installed the trial version and I find Affinity Photo superior in every aspect, not even their ML upscale impressed me. I think their strength is a simpler and intuitive interface whereas Affinity is more "Adobe like" feature packed.
Score: 2 Votes (Like | Disagree)
Read All Comments

Thursday May 13, 2021 2:33 am PDT by Tim Hardwick
Popular image editor Pixelmator Pro has announced a time-limited $19.99 sale on the app, offering customers 50% off the usual $39.99 selling price. In conjunction with the sale, the developers are also sharing a sneak peak at an upcoming Pixelmator Pro 2.1 update, which includes a new AI-driven cropping feature called ML crop. ML crop analyzes the composition of photos using a machine...
Read Full Article • 50 comments

Saturday October 23, 2021 3:56 am PDT by Tim Hardwick
Apple's official public release of macOS Monterey arrives on Monday, October 25, and users should be aware that there are several features in macOS 12 that are only available to machines powered by Apple silicon chips. In other words, they won't work on Intel-powered Macs. Differentiating the user experience like this isn't anything new to iOS users, since each year the latest iPhone models ...
Read Full Article • 256 comments

Thursday April 29, 2021 3:52 am PDT by Tim Hardwick
Popular image editor app Pixelmator Pro received an update today that brings full support for LUT files, or Lookup Tables, which are similar to universal filters/presets that change the look of images and video in a wide variety of apps. A LUT is a set of instructions that tells an app how to edit the colors of an image or video, and Pixelmator Pro now lets users import LUTs so that they can ...
Read Full Article • 20 comments

Monday October 25, 2021 10:03 am PDT by Juli Clover
Apple today released iOS and iPadOS 15.1, the first major updates to the iOS 15 operating system that was released in September 2021. iOS 15.1 comes one month after the launch of iOS 15. The iOS and iPadOS 15.1 updates can be downloaded for free and the software is available on all eligible devices over-the-air in the Settings app. To access the new software, go to Settings > General >...
Read Full Article • 171 comments

Monday October 25, 2021 10:04 am PDT by Juli Clover
Apple today released macOS 12 Monterey, the newest version of the operating system designed to run on the Mac. macOS Monterey comes after months of beta testing and feature refinements. The new ‌macOS Monterey update can be downloaded on all eligible Macs using the Software Update section of System Preferences, and it can also be found in the Mac App Store. Like all Mac updates, ‌macOS...
Read Full Article • 426 comments

Saturday October 23, 2021 3:46 pm PDT by Sami Fathi
Ahead of an official launch later this week, new images sent to MacRumors show the new 14-inch MacBook Pro on display at an Apple Authorized Reseller, offering us an even closer look at Apple's entirely revamped MacBook Pro. The new 14-inch and 16-inch MacBook Pros were by far two of the most highly anticipated and talked about Apple product releases of the entire year. Now that Apple has...
Read Full Article • 626 comments