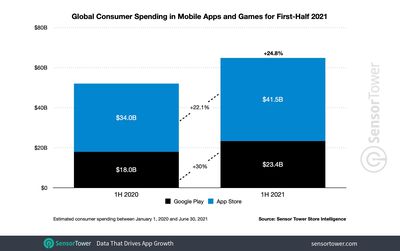 The app market research firm says consumer spending on in-app purchases, subscriptions, premium apps and games in the ‌App Store‌ was 1.8 times the revenue generated by Google's Play Store, which generated $23.4 billion over the same period.

Despite ‌App Store‌ spending, however, Google Play is projected to enjoy stronger year-on-year growth overall because of activity in markets still feeling the impact of the global health crisis.

In the first half of 2021, the ‌App Store‌ has grown 22.1 percent from about $34 billion in the H1 2020, a little more than seven percentage points lower than the 29.3 percent growth experienced during 1H20 due to accelerated spending during the onset of the COVID-19 pandemic.

Google Play's revenue in H1 2021 has grown 30 percent from $18 billion in 1H20, over four percentage points higher than the 26.8 percent growth experienced last year when compared to the same period in 2019. The outsized Y/Y revenue growth on Google's marketplace is being driven by markets such as the Philippines, where COVID-19 has resulted in continuing business closures and quarantines.

TikTok maintained its dominance in the top grossing mobile apps worldwide for the first half of 2021. Consumers are believed to have spent more than $920 million on TikTok in the period, up 74% when compared to the year-ago period.

Meanwhile, YouTube held onto its spot as the second highest-grossing non-game app, with an estimated consumer spend of $564.7 million. Tinder ranked third with an estimated revenue of approximately $520.3 million, while Japanese comic reader Piccoma and Disney's streaming platform Disney+ sat in fourth and fifth place, respectively.

An estimated 72.5 billion app downloads took place globally across both stores in 1H21, up 1.7% from 71.3 billion during the year-ago period. That figure pales in comparison to the 25.7% year-on-year growth experienced by app adoption last year when compared to the first half of 2019.

Global app spending reached almost $65 billion across iOS and Android in the same period, with the vast majority of money spent on games, which accounted for approximately $26 billion of the estimated $41.5 billion generated by Apple.

Apple is facing several threats to its highly lucrative ‌App Store‌ model, which has come in for criticism from some developers and antitrust bodies for its commission rate policy and alleged anticompetitive practices, including the pre-installation of Apple's apps on its own devices.

jlc1978
It's pretty amazing how Apple and others have created marketplaces where developers can sell their products for almost no upfront costs beyond developing the app; and still keep 70% of the sales price. If the same model existed today as did in the 80's I'd bet 90% or more of the apps on the app store would not exist because developers could not afford the upfront costs of marketing, distribution, production, etc. for a hoped for enough sales to cover them and make a living off of their 30% cut of retail.
Score: 10 Votes (Like | Disagree)

And Apple stole about $3 billion of that thanks to their App Store monopoly. Change can't come soon enough

Apple charging 30% to a developer who agrees to the terms of service does not equate to Apple stealing money, at least not in this universe.
Score: 9 Votes (Like | Disagree)

hortod1
I think my kids are responsible for a lot of that
Score: 8 Votes (Like | Disagree)

It's pretty amazing how Apple and others have created marketplaces where developers can sell their products for almost no upfront costs beyond developing the app; and still keep 70% of the sales price. If the same model existed today as did in the 80's I'd bet 90% or more of the apps on the app store would not exist because developers could not afford the upfront costs of marketing, distribution, production, etc. for a hoped for enough sales to cover them and make a living off of their 30% cut of retail.

100%. "Back in the day" one had to bear the cost of printing, duplication, shipping etc. A major investment for a major risk. Here Apple has made it so the risk isn't in the financials...it's in the ability to succeed....which is the way it should be.
Score: 7 Votes (Like | Disagree)

DelayedGratificationGene
Wondering why MacRumors didn’t pick up Apple filing for Epic judge to consider NCAA decision? Only Appleinsider highlighted. I’m no lawyer but from available commentary it seems like a pretty significant positive for Apple in the case. The media was literally all over the case reporting on what the judge had for lunch while happening so why not at least report this significant development now?
Score: 6 Votes (Like | Disagree)

QED...and thus the above is proved. I wonder how off Sensor Tower is because the article starts with: "A new report by Sensor Tower claims...."

And Apple stole about $3 billion of that thanks to their App Store monopoly. Change can't come soon enough

I wouldn't hold my breath if what you mean by soon enough far out into the future in spite of all of the churning. But to your point, you're right. Apple hired "hit men" to hold guns to peoples heads who had iphones forcing them to buy a paid app from the app store. /s
Score: 6 Votes (Like | Disagree)
Read All Comments

Monday August 2, 2021 7:04 am PDT by Hartley Charlton
Apple has leaped from third to first place for profit and from twelfth to sixth place for revenue in the Fortune Global 500 rankings of the world's biggest companies. After reaching a record high of $33.3 trillion in last year's rankings, total revenue for the world's biggest companies fell 4.8 percent to $31.7 trillion this year. Even so, the combined sales of all of the companies on the...
Read Full Article • 16 comments

Friday March 25, 2022 4:46 am PDT by Tim Hardwick
European lawmakers have provisionally agreed upon a new law that would force Apple to allow user access to third-party app stores and permit the sideloading of apps on iPhones and iPads, among other sweeping changes designed to make the digital sector fairer and more competitive. The European Council and European Parliament said on Friday they had reached a political agreement on the...
Read Full Article • 567 comments