Apple this week announced that, to date, Apple TV+ films and series have received 389 awards nominations and have won 112 awards since the streaming service launched in November 2019. The company said Apple TV+ has "received more award recognitions faster than any other streaming service in its debut." 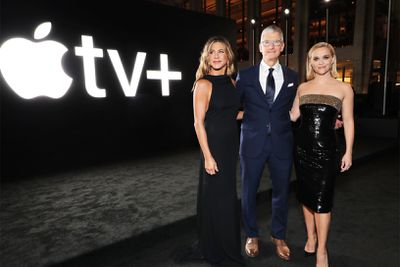 Rival streaming services like Netflix and Disney+ do not appear to have readily available awards statistics for comparison, but Netflix secured a record-breaking 160 Emmy Awards nominations in 2020 alone, compared to 18 for Apple TV+. Netflix has been streaming original content since 2013, however, giving it a six year lead on Apple TV+.

Apple TV+ has more original content coming over the next several months:

Apple TV+ costs $4.99 per month, with a seven-day free trial available to all users. Apple TV+ is also included free for one year when you purchase and activate a qualifying Apple device through June 30, 2021 — it's dropping to three months after this date.

ScottishDuck
That's a 1:1 ratio of awards to viewers. Impressive!
Score: 60 Votes (Like | Disagree)

Isn't that Jennifer Aniston in the photograph?

And why is she looking away from the camera?

jasheeky
Notice Tim Cook being respectful with his hands.
Score: 13 Votes (Like | Disagree)

ghost187
I pay $30 for Apple One for the family because of music and iCloud, but I’m seriously considering downgrading because all the other services are so bad that they don’t combine to be worth $5.
Score: 11 Votes (Like | Disagree)

Stella
But how many paying subscribers are there?
Score: 11 Votes (Like | Disagree)

matt_and_187_like_this
Awards per Dollar spent is the metric I'd be interested in.
Score: 10 Votes (Like | Disagree)
Read All Comments

Thursday September 29, 2022 12:38 pm PDT by Juli Clover
Tony Blevins, Apple's vice president of procurement, is set to depart the company after he made a crude comment about his profession in a recent TikTok video, reports Bloomberg. Blevins was in a video by TikTok creator Daniel Mac, who was doing a series on the jobs of people he spotted with expensive cars. After seeing Blevins in an expensive Mercedes-Benz SLR McLaren, Mac asked Blevins what ...
Read Full Article • 298 comments