Nashville Chatter Class has discovered a new Russian-language regulatory filing in the Eurasian Economic Commission (EEC) database pointing towards several unreleased iPhone 13 models that Apple will be launching in the fall. 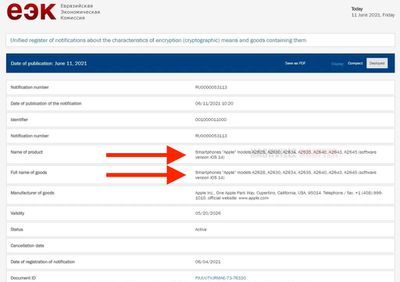 The EEC filing, published on Friday, satisfies Russia's requirement for companies to register all products containing encryption and/or cryptographic tools. Several new models of ‌iPhone‌ and Mac have been registered with the EEC in previous years and these devices turned out to correspond with later device launches.

Apple's 2021 ‌iPhone 13‌ lineup, due to launch in September, will look similar to the 2020 ‌iPhone‌ lineup, with four devices in sizes that include 5.4-inches, 6.1-inches, and 6.7-inches, with two of the iPhones being higher-end "Pro" models and two positioned as lower-cost, more affordable devices.

Major design changes are not expected, and 2021 iPhones will have the same feature set as the 2020 iPhones, but we can count on camera improvements, a faster A-series processor, a new 5G chip from Qualcomm, increased battery life, and some tweaks to the notch. See our dedicated iPhone 13 roundup for all the details.

dotnet
We’ve always been at war with Eurasia.
Score: 9 Votes (Like | Disagree)

Also, we've already had iOS 13, so any damage from the spooky number is already done.
Score: 6 Votes (Like | Disagree)

Fingers crossed that one of these models is the Mini Pro Plus SE.

Is that the Ceramic Edition Pro Elite or the Classic Gold Surgical Steel Plus?
Score: 5 Votes (Like | Disagree)

13 is considered unlucky in western cultures, but numbers like 4 and 9 are unlucky in China.

Every number probably has a lucky / good // unlucky / bad meaning somewhere, but I think we've moved on from less enlightened periods in our history. :)

Microsoft "traditionally" has an aversion to 13, but Apple so far haven't demonstrated any.
Score: 5 Votes (Like | Disagree)
Read All Comments

Monday August 2, 2021 9:34 am PDT by Juli Clover
Apple is preparing for a slew of fall product launches according to new filings that showed up today in the Eurasian Economic Commission database. There are listings for new Mac and Apple Watch models, all of which have previously unknown model identifiers that indicate that they're upcoming devices. There are six new Apple Watch identifiers, including A2473, A2474, A2475, A2476, A2477, and...
Read Full Article • 139 comments