As part of WWDC this week, Apple introduced a new MailKit framework for macOS Monterey that enables developers to create Mail app extensions that block content, perform message and composing actions, and help with security. 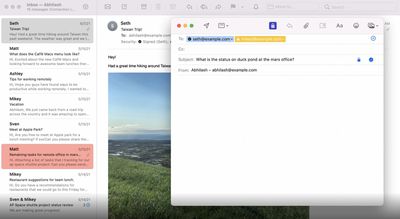 There will be four main categories of Mail app extensions, according to Apple:

Xcode 13, available in beta, includes a template for developers looking to create Mail app extensions on the Mac. The extensions can be built into existing Mac apps and can also be distributed through the Mac App Store, according to a WWDC session about MailKit, which is available on macOS only and not iOS or iPadOS.

In the WWDC session, Apple indicated that older Mail app plug-ins will stop functioning in an unspecified future macOS release.

macOS Monterey is available now in beta for developers, with a public beta to follow in July.

What we would like to get: correctly working gmail with most of its features in the native mail app
What we are getting:

Who is “we?” People who don’t care about their privacy, who demand that Apple support non-standards based protocols and functionality, and who work at Google?
Score: 24 Votes (Like | Disagree)

countryside
Can someone make an extension that lets us schedule a time for an email to be sent?
Score: 21 Votes (Like | Disagree)

What we would like to get: correctly working gmail with most of its features in the native mail app
What we are getting:

To be fair, that’s mostly the fault of Google’s bizarre non-standard implementation of IMAP. Those features don’t really work on any app other than GMail.

As for the mail plug-ins, they were never a great solution. Apple will continually move away from systems like mail plug-ins that live in the memory space of another application to inter-application communication systems like extensions that allow an application to extend another application visually without sharing memory space MacOS Classic style. I, for one, am looking forward to having a mail extension system that provides a stable API and that doesn’t break with each point release.
Score: 13 Votes (Like | Disagree)

Peepo
Hope will be possible to tag a sender as not junk.
Score: 10 Votes (Like | Disagree)

Same thing, different day, Apple can never find the original team that built a program, so they have to rebuild it from the ground up! lol

You do realize that Mail.app is a direct continuation of the NeXTStep Mail.app, yes? Which means that it’s nearly 40 years old. Most of the original team is probably retired by now.

But this is also a change that needed to occur. Previously, mail bundles would break between point releases. Not major releases, mere patches. Every time Mail.app got updated, these bundles needed to get updated, too, and, until they did, the bundles wouldn’t work. Now we have a stable API guaranteed not to break on point releases and that will likely be stable across multiple major releases. We’ll probably see more mail extensions as a result of this, while previously, it was only worth the effort to devs who were absolutely serious about email extensibility. This API could also be ported to MobileMail.app, which, until now, hasn’t had any extensibility (except maybe for jailbreaking, but even then, I don’t think Mail was a common target for jailbreakers looking to tweak the system).
Score: 6 Votes (Like | Disagree)

Graham King
It would be nice to be able to easily add HTML signatures. I might switch back from Spark if this is possible.
Score: 4 Votes (Like | Disagree)
Read All Comments

Tuesday November 9, 2021 10:42 am PST by Juli Clover
iCloud+ subscribers who use Hide My Email can do so directly from the Mail app after installing the iOS 15.2, iPadOS 15.2, and macOS Monterey 12.1 betas that came out today. The feature update is outlined in Apple's release notes for the beta, and it should make Hide My Email much more convenient to use on Apple devices. For those unfamiliar with Hide My Email, it is an iOS 15 and macOS...
Read Full Article • 24 comments

Wednesday August 17, 2022 9:51 am PDT by Juli Clover
Apple is aiming to hold its first fall event on Wednesday, September 7, reports Bloomberg's Mark Gurman. The event will focus on the iPhone 14 models and the Apple Watch Series 8. The standard iPhone 14 models are expected to get few changes, but the iPhone 14 Pro models will include updated camera technology, the removal of the notch in favor of a pill-shaped and hole-punch cutout, an A16...
Read Full Article • 245 comments