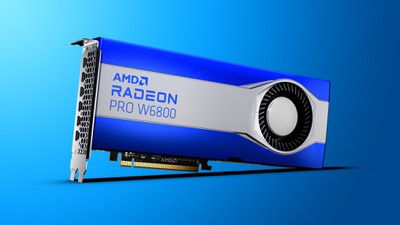 Built on 7nm-based AMD RDNA 2 architecture, the new higher-end Radeon Pro W6800 graphics card delivers up to 79% faster graphics performance than the previous-generation Radeon Pro W5700, although this is based on a test system powered by an AMD Ryzen 9 5950X processor rather than an Intel processor. The W6800 also features 32GB of high-speed GDDR6 memory with ECC support, and 128MB of AMD Infinity Cache.

AMD says the W6800 graphics card is available now from leading retailers for a suggested price of $2,249. For comparison, the W5700X graphics card is a $600 built-to-order upgrade option for the Mac Pro, which starts at $5,999 itself.

There's also a new mid-range W6600 graphics card that features 8GB of high-speed GDDR6 memory with ECC support, and 32MB of AMD Infinity Cache. AMD expects the W6600 to be available in the third quarter of 2021 for a suggested price of $649.

Better sell the Mac Pro and get a decent PC.

And then after that, sell the decent PC to get a better M1 Mac.
Score: 7 Votes (Like | Disagree)

People doing colour sensitive work. Or indeed anything where a TV isn't a good option even if it has more k's.
Score: 6 Votes (Like | Disagree)

velocityg4
So, what's their hashrate? I have a feeling these'll be paper only prices. See your local scalper for the real price.
Score: 6 Votes (Like | Disagree)

No such thing. You have to use windoze.

Tuesday June 8, 2021 12:20 pm PDT by Juli Clover
New Intel chips appropriate for a refreshed Mac Pro have been spotted in the Xcode 13 beta, and Bloomberg's Mark Gurman has confirmed that Apple is indeed preparing an updated version of the Intel-based Mac Pro. The chip data added to the beta is for Intel's third-generation Xeon Scalable processor, Ice Lake SP, which Intel announced back in April. According to Intel, the chip offers...
Read Full Article • 292 comments

Wednesday June 9, 2021 8:23 am PDT by Joe Rossignol
While there are many great new features in macOS Monterey, several of them are not available on Intel-based Macs, according to Apple. On the macOS Monterey features page, fine print indicates that the following features require a Mac with the M1 chip, including any MacBook Air, 13-inch MacBook Pro, Mac mini, and iMac model released since November 2020:Portrait Mode blurred backgrounds in...
Read Full Article • 839 comments

Tuesday June 1, 2021 7:30 am PDT by Joe Rossignol
Popular cryptocurrency exchange platform Coinbase today announced that the Coinbase Card now supports Apple Pay and Google Pay. Select customers will be invited from the Coinbase Card waitlist starting this week. Coinbase Card is a debit card, so signing up will not impact your credit score, and there are no application fees. Once you are approved for the card, you can immediately begin...
Read Full Article • 42 comments

Monday May 24, 2021 9:00 am PDT by Eric Slivka
Anker today is introducing a new set of gallium nitride (GaN) USB-C chargers that offer fast charging speeds for mobile devices in a design that's smaller than ever. The new Nano II line is available in 30W, 45W, and 65W versions, and Anker says it has improved the chips and internal layout of its chargers to deliver greater efficiency while generating less heat. The 30-watt charger measures ...
Read Full Article • 53 comments