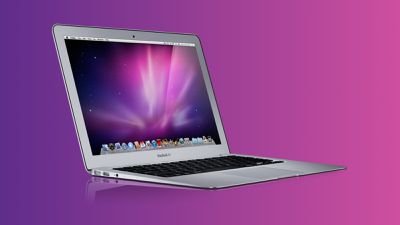 An email shared by the Twitter account Internal Tech Emails, disclosed as part of Epic Games' legal dispute with Apple, shows an Apple executive team meeting agenda written by Steve Jobs from August 2007, just two months after the launch of the original iPhone. The document sets out discussion points for a number of Apple products that were never released.

The agenda refers to a 15-inch ‌MacBook Air‌ model for 2008. The ‌MacBook Air‌ that actually debuted in 2008 was a 13-inch model, and in 2010 the company introduced an 11-inch version. The 15-inch display size was kept for the MacBook Pro only and never came to the ‌MacBook Air‌, but there is now concrete evidence that the company was seriously considering a larger ‌MacBook Air‌ variant.

Rumors about a 15-inch ‌MacBook Air‌ model recently resurfaced, with Apple reportedly looking once again at offering a larger screen size on its ultra-thin laptop.

The document also refers to a Mac tablet. This device may simply have been a precursory concept to the iPad, which was introduced in 2010, but it is of note that the company specifically considered a tablet form factor for the Mac at first.

The agenda mentions an iPod "Super nano," priced at $199 and seemingly set to launch in 2008. This price point is $50 more expensive than the 4GB base model third-generation iPod nano that was released just one month after this email was sent. The iPod Super nano appears to be a distinctly different device to the third-generation iPod nano, but it is possible that it could have been an alternative name and price point for this device instead.

and 1989 others
Ill bet there is a room somewhere deep inside the Apple campus full of prototype devices that never made it to market.

I would love to see inside that room.
Score: 18 Votes (Like | Disagree)

Freeangel1
Even the current M1 laptops that are out I looked at. The screen real estate was SO SMALL.
So I say Bring on the 15" MacBook Air.
16 to 17" is my favorite in a laptop.
Score: 10 Votes (Like | Disagree)

macinfojunkie
A big company considers many different ideas before going to market with final offerings that have the most appeal and best chance of success.... now that's revolutionary! /s.
Score: 8 Votes (Like | Disagree)

rpmurray
A memo from 1972 found in the back of a drawer in my desk says I was considering buying a flying car by 2001. That product never materialized.
Score: 8 Votes (Like | Disagree)