Twitter appears to have mistakenly confirmed its plans to launch a new subscription tier called "Twitter Blue," with the new purchase option now listed in the iOS App Store. 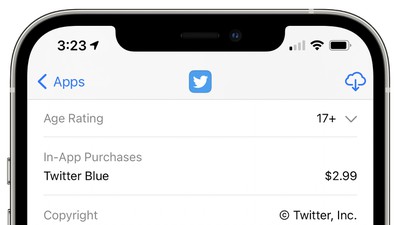 Under In-App Purchases, there's now a "Twitter Blue" option that's priced at $2.99, though the feature does not appear to be live in the iOS app at this time.

The Twitter Blue in-app purchase option was discovered by researcher Jane Manchun Wong, who has previously shared details on Twitter Blue that were found buried in the Twitter for iOS code.

Twitter Blue will include an "Undo Tweet" option that holds a tweet for a set period of time before sending it out so you can choose to undo it, and a "Reader Mode" that makes it easier to read long threads.

There are also new color themes to choose from and custom app icons, plus a Collections feature for saving and organizing favorite tweets to make them easier to find in the future.

It's not clear when Twitter Blue will become available, but with the in-app purchase option live in the ‌App Store‌, it signals that the feature is set to launch in the near future. When asked for more information, Twitter said it had no comment at this time.

LFC2020
Someone needs to close down this garbage, along with all the other scummy social media platforms
Score: 59 Votes (Like | Disagree)

macduke
They're reportedly also working on Twitter Orange, which will cost $250/mo and will let you see you know who's tweets.
Score: 31 Votes (Like | Disagree)

If I used Social Media, there is no way I would pay for this service. I definitely wouldn't
pay to argue with strangers over typical media drivel.

Why pay for it, when you can do it for free right here on mac rumours ??
Score: 28 Votes (Like | Disagree)

Apple_Robert
If I used Social Media, there is no way I would pay for this service. I definitely wouldn't
pay to argue with strangers over typical media drivel.
Score: 26 Votes (Like | Disagree)

For Social Media addicts, this new Twitter subscription may be very popular for them.

Anyone paying for social media, needs to have their brain examined and seen by a shrink daily. ?‍♂️
Score: 22 Votes (Like | Disagree)

RavynArcadia
Hard pass. Not worth it even if it cost a buck.
Score: 18 Votes (Like | Disagree)
Read All Comments

Friday May 14, 2021 5:37 am PDT by Hartley Charlton
Twitter will re-launch its long-awaited verification program next week, according to researcher Jane Manchum Wong. Twitter verification has been a mainstay of the social media platform since 2009. A blue checkmark by a user's name indicates that they are verified, helping observers to distinguish genuine notable account holders, such as celebrities, politicians, or organizations, from...
Read Full Article • 56 comments

Twitter's Desktop Dark Mode Just Got Even Darker for Some

Thursday February 4, 2021 1:18 am PST by Tim Hardwick
If you opened Twitter in your desktop browser today and something seemed different in the website's appearance, you're not wrong. In a change to its usual dark blue tint, Twitter is switching its desktop dark theme to a pure black. Follow @MacRumors on Twitter Twitter has told The Verge that the change is part of an update that's rolling out to make the Twitter website respond to the light...
Read Full Article • 28 comments

Wednesday April 21, 2021 12:47 pm PDT by Juli Clover
Twitter today announced that iOS and Android users are now able to view and upload 4K images when using the mobile Twitter apps. To view and uploaded images in 4K, Twitter users can opt for high-quality images under the "Data Usage" setting in the Twitter preferences. Time to Tweet those high res pics –– the option to upload and view 4K images on Android and iOS is now available for ...
Read Full Article • 25 comments

Wednesday March 31, 2021 3:25 pm PDT by Juli Clover
Twitter-owned app Periscope today announced that its dedicated app for the live video service will be shut down as of today. In a tweet, Periscope said that today is the last day that the Periscope app will be available. Periscope first announced its planned shutdown in December of 2020, and said that the app was being shuttered because most of the Periscope functionality has now...
Read Full Article • 36 comments

Friday February 26, 2021 4:07 am PST by Tim Hardwick
In an attempt to reduce its dependence on advertising to generate revenue, Twitter has announced two new features coming to the social media platform later this year, including a "Super Follow" feature that will let users charge followers for access to exclusive content. According to Twitter, the additional content could include things like bonus tweets, access to a community group, video,...
Read Full Article • 68 comments