The upcoming Apple Watch Series 7 is rumored to feature two main upgrades, according to recent reports. 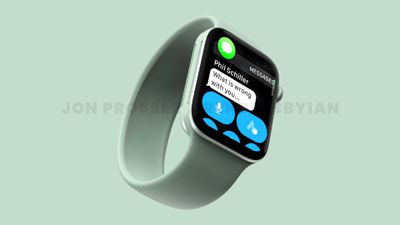 The first significant change is a completely new design. Last year, Apple analyst Ming-Chi Kuo said that the 2021 Apple Watch would undergo a redesign. Now, leaker Jon Prosser has revealed renders purporting to be of that new design based on leaked real-world images and CAD files from a supply chain source.

The new design features much flatter sides, bringing the Apple Watch in line with Apple's recent design language seen on the iPad Pro, iPad Air, iPhone 12, and iMac. Prosser expects the display size options to remain the same, but there could be a new green color option.

The second upgrade is the addition of first-of-its-kind blood glucose monitoring technology, in what could be a breakthrough for managing conditions such as diabetes more easily.

The Apple-designed blood glucose optical sensor is believed to be a skin-top continuous monitoring solution that does not require an implant. The company is said to have secured patents around blood glucose monitoring, and it is now purportedly "focusing on securing reliability and stability prior to commercialization of the technology."

In May, it was revealed that Apple is the largest client of British electronics start-up Rockley Photonics. Rockley Photonics has developed non-invasive optical sensors for detecting multiple blood-related health metrics, including blood pressure, blood glucose, and blood alcohol levels.

The Apple Watch Series 7 is expected to launch later this year, featuring improved swim-tracking capabilties. While there have been reports of micro-LED displays and solid-state buttons with haptic feedback for the Apple Watch, these features are not expected to arrive this year.